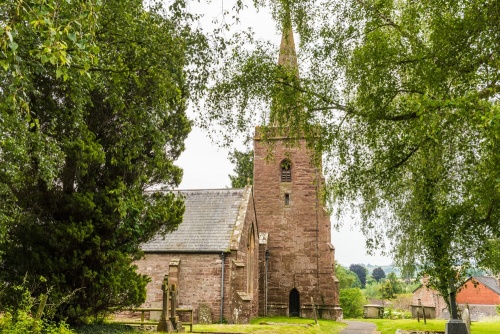 There was a church at Llangarron at least as early as the 11th century. That Saxon church was re-consecrated under William the Conqueror as 'Lan garan' (Lan being the anglicized version of the Welsh 'Llan', meaning church) and 'garan' coming from the name of the stream that runs through the centre of the village.

An alternative interpretation is that 'garron' comes from the Welsh 'garan' for a stork, heron, or crane. A likeness of a heron is worked into the churchyard gate.

The oldest reference to a church at Llangarron comes from the reign of Edward the Confessor in the middle of the 11th century. That first church was built of timber. A charter of Monmouth Priory dated 1150 refers to Llangarron as being under the care of the Benedictine order. 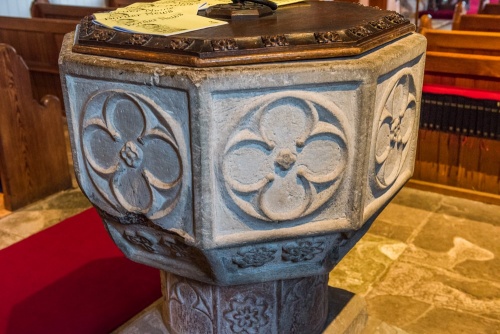 The bulk of the current building is 14th century, which is when the nave, chancel, and west tower were built. A century later the south porch was added. The building was further enlarged by the addition of a north aisle in the 17th century, paid for by Thomas Rawlins of Kilrege (d 1676).

In the churchyard is the top of the old spire, now serving as a sundial.

The sculptured slab is almost three feet long and depicts a priest in a clerical gown with a knot at the waist. The figure's hairstyle is Roman, as is his nose, suggesting the possibility of a Romano-British origin. The effigy appears to have been part of a larger slab that was cut down at some point in the past. 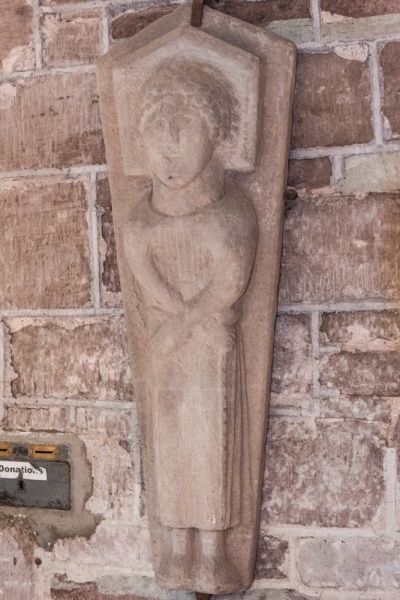 There are several other very good monuments including that of William Gwillym (d 1608) on the east wall of the sanctuary and another on the south wall to Rowland Scudamore (d 1697). Look for a plaque commemorating Flight Lieutenant F. Jolly and Flying Officer W.D. Langworthy, DFC, who were killed in a flying accident at Llangarron on 7 January 1944.

St Deinst's Church is a wonderful country church in a delightful village setting. It was open when we visited. 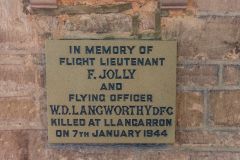 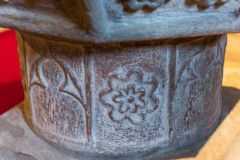