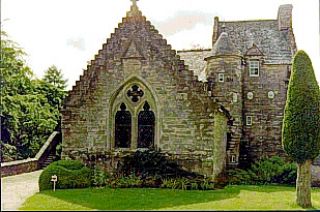 Stobhall
A fascinating group of three historic buildings stand in a wonderful setting above the River Tay. Stobhall includes a late 16th-century tower house attached to a 14th-century chapel. Nearby is a mid 17th century Dower House. The three historic buildings stand beside a small formal garden, which leads to a woodland garden area with walking trails.

The oldest building on the site is the chapel, which boasts an unusual painted ceiling depicting 8 contemporary European Christian kings riding horses (and the king of Mauritania on an elephant!). The Dower House may be the youngest of the three buildings at Stobhall, but it too has great historic interest; above the staircase is a wonderful plasterwork ceiling dating from the late 17th century.

In the garden is a modern folly which houses a late 17th-century trompe l'oiel painting saved from a garden house at Polton House in Edinburgh when that latter house was destroyed.

Stobhall was built for the Drummonds, who gained the estate through the marriage of Sir John Drummond to Mary Mountfitchet in 1367. The couple's daughter Annabella became Queen of Scotland when she married Robert III in that year. The chapel was constructed at this time, but it is the only reminder of the Drummond ownership to survive.

When the 1st Lord Drummond built a new fortified house at Concraig in 1490, Stobhall became a hunting and fishing lodge. In 1578 the tower was added at Stobhall, and the chapel was converted into living quarters. In the 1640s the ceiling of the chapel was painted with an allegorical painting showing the mounted Christian kings of Europe as described above. The mythical figure of Prester John was added to the group.

One amusing note to the painting is that the labels for the King of France and the Holy Roman Emperor have been accidentally reversed. The painting was plastered over during the rise of Calvinism in Scotland and was not rediscovered until 1843.

During the English Civil War, Oliver Cromwell invaded Scotland and seized Drummond Castle. The Earl of Perth then took refuge at Stobhall. The Earl built the Dower House to create larger accommodation than the old buildings at Stobhall could provide. The Drummonds returned to Drummond Castle after it had been restored, and left Stobhall to moulder away. It was partially restored in the 1880s and again in the 1950s.

NOTE:
Stobhall has been sold to new owners, and as far as we can determine is no longer open to the public. Please DO NOT plan a visit!

More self catering near Stobhall >>

More bed and breakfasts near Stobhall >> 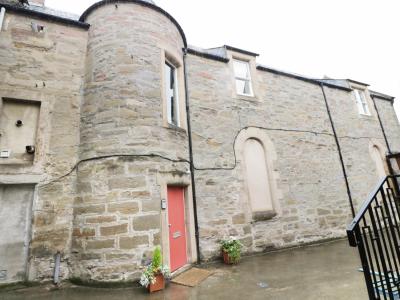 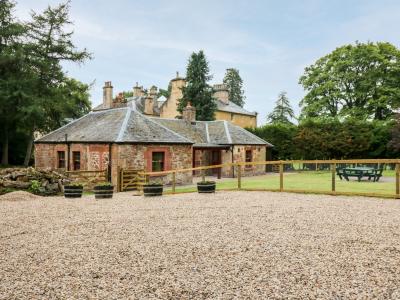 This single-storey cottage lies in the village of Aberargie near Perth, Scotland and can sleep four people in two bedrooms.
Sleeps 4