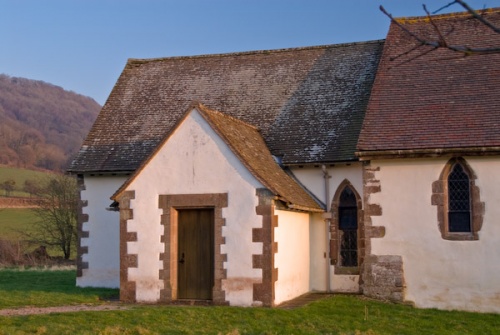 It is hard to imagine a church with more of a sense of isolation. St John the Baptist, Llanrothal, is situated deep along a lonely valley rising up from the River Monnow, practically on the border of England and Wales.

The age of this whitewashed church is something of a mystery; legend tells that it was founded by the Celtic saint, Ridol, and only in the Norman period was the church rededicated to St John the Baptist. Much of what we can see today is 12th-century work, with a window of that date in the north wall, and 14th-century windows elsewhere.

The church is composed of a small south porch leading, unusually, into the chance. There is a step down from the chancel to a very small and simple nave. At the west end of the nave is located a very simple bowl-shaped font upon a narrow pedestal. From the style, it would be a fair guess that the font dates to the early Norman period.

The intriguing thing about the font is not the date, however, or the absence of decorative elements. It is, rather, the presence of a small, raised 'cross pattee' at the centre of the bowl. The cross pattee is a cross which tapers towards the centre, not unlike an Iron Cross, but without the indented ends associated with that later symbol.

The cross pattee sits on a small, raised plug of carved stone, not unlike the drain plug of a modern bathtub. The cross pattee is often associated with the Knights Templar (see Garway church article), though there is no known association of that knightly order with this remote church.

Also within the interior is a very rustic carved bench and a panelled pulpit in Jacobean style. The altar is exceedingly simple, composed of a simple slab set upon two upright blocks of stone.

The most appealing aspect of this little church is its setting. The valley is remote, yet stunningly beautiful, seeming more Welsh than English. There is little at Llanrothal beyond some scattered farm buildings, so it is not surprising that the church of St John the Baptist has passed into the care of the Churches Conservation Trust.

The church building is located several hundred yards along a public footpath, with limited parking available along the roadway. The footpath may be muddy, so good footwear is advisable.

More self catering near Llanrothal church