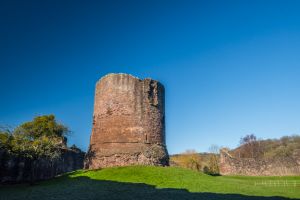 The first castle at Skenfrith was built by the Normans to protect transport routes to Hereford. Skenfrith, along with nearby White Castle and Grosmont, provided much needed border defenses between England and Wales. That first castle was built of timber, and stood atop a man-made mound, made necessary because the castle site lies on level ground beside the River Monnow.

In the 12th century the mound was levelled to make way for a more substantial stone fortress to better counter possible Welsh attacks.

The site was sub-rectangular, with a round tower at each corner and a circular stone keep in the centre. The keep was accessed via a timber stair to the first floor, which has a spiral stair to the upper floors. The corner towers had no garderobes or fireplaces, so we can surmise that they were intended solely for defence.

A hall and domestic apartments provided accommodation, and there are foundations of a kitchen and a circular oven. The site was enclosed within a wide moat for extra defence, fed by the waters of the Monnow. It was partially rebuilt around 1500 but by the end of that century had fallen out of use. 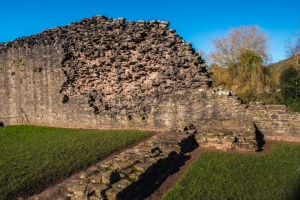 The remains of the original castle were discovered during excavations. However, most of what we see now was built by Hubert de Burgh, who had ambitions to be an important Marcher lord.

The most noticeable feature of the castle is the circular keep, where the living quarters were located, in the middle of the ward. Remains include signs of a fireplace, windows, corbels, and a garderobe. Only foundations of other living quarters survive.

The castle is well signposted, and is set in an idyllic location, with the River Monnow on one side and a row of stone cottages on the other, and a ring of green hills rising up from the flat land near the river. The site is open at any time to visitors and there is free parking immediately outside the castle.

It won't take long to explore the castle; you cannot climb the walls or the keep, and the remains inside the castle walls are not extensive. Yet Skenfrith is one of my favourite castles in south Wales; the keep is stunning, and the riverside location is wonderful.

I highly recommend visiting the nearby church of St Bridget, just a hundred yards down the lane. St Bridget's is one of the oldest Christian sites in Monmouthshire and boasts a superb 14th century robe known as the Skenfrith Cope.

Our verdict: an impressive medieval site, in an attractive location, easily reached by major roads. 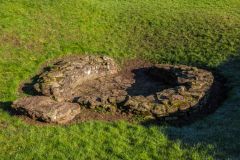 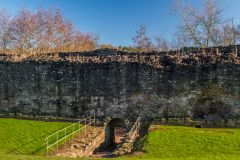 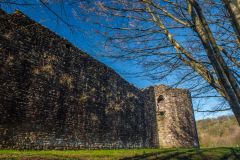 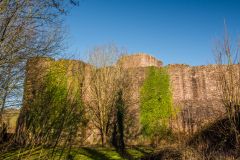 About Skenfrith Castle
Address: Skenfrith, Monmouthshire, Wales
Attraction Type: Castle
Location: On the B4521 at Skenfrith on the Welsh side of the Monnow River
Website: Skenfrith Castle
Cadw
Location map
OS: SO458 202
Photo Credit: David Ross and Britain Express

More self catering near Skenfrith Castle >>