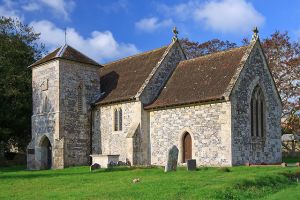 Berwick St Leonard Church
A 12th-century Grade-II listed church in a secluded location, St Leonard's retains much of its Norman character despite a Victorian restoration. There is a carved Norman tympanum over the south door, and an Agnus Dei (Lamb of God) carving over the inside of the door, also of Norman date.

Within the church are several monuments to members of the Howe family, including an impressive 17th-century monument to George Howe (d. 1647) and his wife, who are shown holding a skull. Nearby is a touching memorial to the couple's six children, the oldest of who died at the age of three.

The cylindrical font is another Norman survivor, and there is a 14th-century window in the chancel.

The church was constructed of limestone and flint, with three nave bays leading to a very small chancel. The sturdy 14th-century tower is not built at the west end of the church as you might expect, but over the south porch. The church was restored in 1859 by the lord of the Fonthill estate.

The advowson (the right to name the rector) was owned by Shaftesbury Abbey until the Dissolution of the Monasteries.

The tower holds a pair of 18th-century bells, the oldest of which was cast in 1725. The chancel was rebuilt in the early 14th century when new windows were inserted in the nave.

The church is now redundant and is cared for by the Churches Conservation Trust. It is normally open daylight hours to visitors. Access is along a paved drive through the Fonthill Estate.