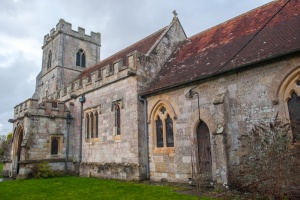 The medieval church of St Peter is located on a rise of ground overlooking the long main road that links the villages of Codford St Peter and Codford St Mary.

The first written record of a church here comes in 1291, but there was clearly a much earlier building on the spot, for in the chancel is a beautifully carved Saxon cross shaft that may date to as early as the 8th century, shortly before 800 AD. The lack of weathering suggests that the cross was always indoors.

The shaft is carved with the figure of a man amid foliage, with geometric designs. Though several theories have tried to interpret the meaning of the carvings, it is not really clear what they symbolise.

The east face has a partial cross carving, suggesting that the stone may have been split lengthways. The human figure is a young man wearing a cloak, with a knife at his belt. He holds a rattle in one hand and a twig of alder in his right hand. He bears a long moustache.

A blank panel beneath the figure suggests that the carver left room for an inscription which was never completed. At the top of the east face is a Celtic style cross, above a pair of eels and two fish. The west face has intricate foliage, with an open flower.

The Saxon church would have been built of timber and wattle, and stood where the current chancel is built. The timber church was rebuilt in stone in the 12th century, and parts of the chancel walls date to this time. The Saxon cross shaft was built into the new stone wall of the chancel, perhaps because the Normans considered it to be pagan. It was only rediscovered during restoration work in 1864. 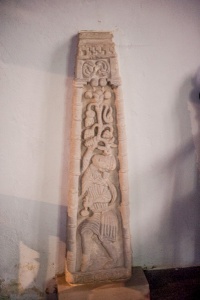 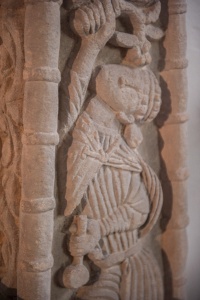 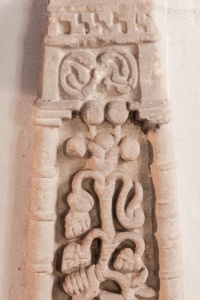 Also in the chancel is a 13th-century triple sedilia, probably built by John Giffard.

The 12th-century church was extended in the 14th and 15th centuries with a porch and tower. To the left of the porch you can see the Hungerford family coat of arms, a reminder that the Hungerfords held the manor in the early 15th century.

Under the tower is a 12th-century font, carved from a single block of stone. The carved faces of the bowl are striking; one face shows 5 trees, another has 6 rounded arches, the east side has flowers and petals, and the west face has 6 flowers and petals within circles. The font is topped with a carved Jacobean cover.

St Peter's was open when we visited - and thank goodness for that; we found it a wonderfully atmospheric church, and the combination of the Norman font and the Saxon cross shaft makes it well worth a visit. 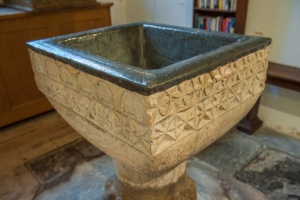 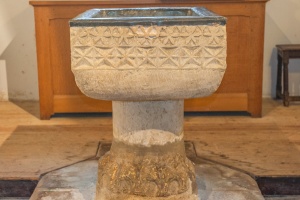 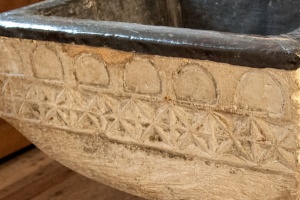 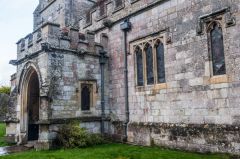 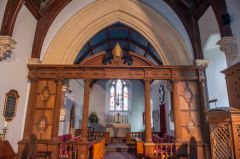 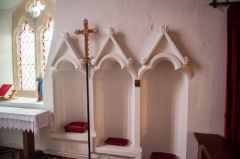 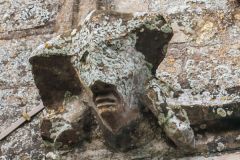 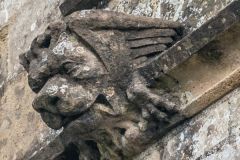