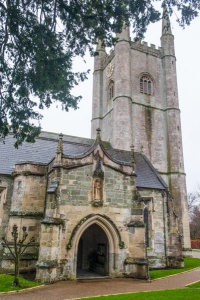 St Mary's church dates to the late Saxon period, and vestiges of the Saxon building can be found in blind arcading set into the exterior north wall of the chancel. The nave is 13th century and the sturdy west tower was added around 1450. Between the west tower and the nearby cottage stand the remains of a Saxon cross shaft, dated to sometime between the 7th-9th century. The cross may be earlier than the church itself.

East Knoyle will forever be associated with Sir Christopher Wren, the architect of St Paul's Cathedral. Wren was born in a cottage in East Knoyle in 1632. His father, also named Christopher but generally known as Dr Wren, was rector at the time. Due to a fire at the rectory, the family had moved into temporary quarters in another cottage. That cottage has now been demolished, and no trace remains, but the rectory where Wren spent much of his childhood still stands. 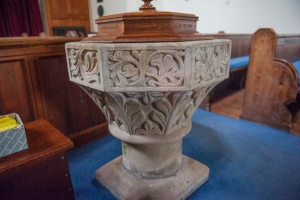 The outstanding historical feature at St Mary's is a series of superb plaster designs decorating the chancel. The plasterwork was instigated by Dr Wren, who served as Dean of Windsor and registrar of the Order of the Garter.

Around 1639 Dr Wren initiated a plan to decorate the chancel with plasterwork designs of scenes from the Old and New Testaments. Dr Wren designed the scenes himself, and they were executed by Robert Brockway.

Over the chancel arch are figures of the 12 Apostles and the Ascension of Christ. Unfortunately, the apostle's heads were destroyed by Parliamentary troops during the Civil War. On the north wall is a very clear scene showing a kneeling figure who may be a self-portrait of Dr Wren himself. Beside the east window is a depiction of Jacob's Dream, with figures ascending a ladder into the heavens.

Dr Wren's plasterwork originally included cherubs on the chancel ceiling, but by the late 19th century they were beginning to fall off and were removed in 1876.

Drama in the Church

One day while Dr Wren was overseeing the work of his plaster designs, a troop of Roundhead soldiers broke into the church. They arrested Dr Wren and knocked the heads off the figures of the Apostles over the chancel arch. The figures remained headless until 1850 when the rector's wife replaced them herself.

During the Civil War turmoil, Dr Wren was accused of heretical practices, including making the plaster figures, which his accusers considered idolatrous. He was brought to trial at Longford Castle, where his plasterer, Robert Brockway, was called as a witness.

Brockway convinced the judges that he was merely an employee executing Dr Wren's instructions. Even though several of Wren's political opponents wrote a letter in his support Dr Wren was found guilty, heavily found, and deprived of his living. He retired to live at his son-in-law's rectory in Blechingdon, Oxfordshire. as for his son, Christopher, he rented a property in East Knoyle until 1662, but never returned to his birthplace after that. 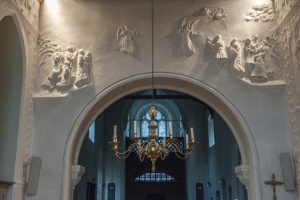 Ascension of Christ over the chancel arch 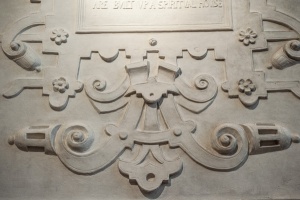 The east window was designed by Sir Ninian Comper as a memorial to George Wyndham of Clouds House. The window was paid for by both Houses of Parliament and bears a dedication written by Prime Minister Sir Arthur Balfour which reads 'To the memory of George Wyndham, Statesman, Orator, Man of Letters, and Soldier'.

The south-east window in the chancel has stained glass by Thomas Willement, a Victorian glass-maker who deserves the credit for reviving the art of stained-glass making. The window is a memorial to the Seymour family and contains their coat of arms. The tiles and reredos are by Sir Arthur Blomfield and are a very good example of high Victorian style.

Sir Niklaus Pevsner has described the Victorian mock-Gothic chancel arch as 'a terrible imitation Norman' work. I didn't think it was that bad!

On a nave column near the arch is a very worn 13th-century head carving. In the nave is a very nicely carved 17th-century font. The west window (in the ringing chamber under the tower) has some very nice stained glass, with one panel showing a grinning figure sticking out his tongue!

St Mary's church was open when we visited. 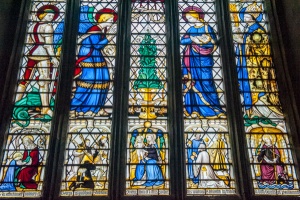 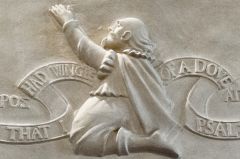 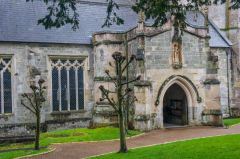 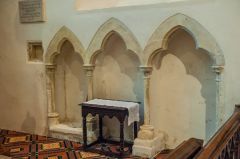 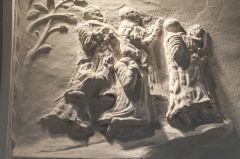 More self catering near East Knoyle

Self Catering near East Knoyle