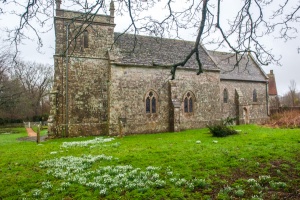 There was a church at Brixton Deverill as early as the Saxon period, for records show that Alfred the Great paused here to pray for victory before he fought the Danes at Edington in 878AD. That Saxon church would have been a simple building of wattle and timber.

The origins of Brixton Deverill are fascinating; according to the most often repeated story, the village was named for Brictric, a Saxon nobleman. According to the Chronicle of Tewkesbury, Brictric was serving as an ambassador in the Low Countries (modern Belgium and Holland) when he met Earl Baldwin and his daughter Matilda.

A match was proposed between Matilda and Britric, but he rejected the idea. Matilda then married William, Duke of Normandy, know to history as William the Conqueror. When William became king of England, Matilda urged him to imprison Brictric at Winchester.

The unfortunate Saxon noble died in prison, and having no heir, his estates were seized by the crown. Matilda then granted the property to the powerful Abbot of Bec, in Normandy. 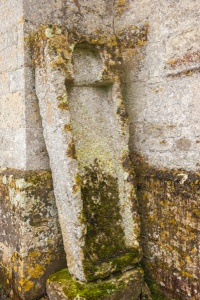 After the Hundred Years War, the French abbey gradually lost its estates in England, and Brixton Deverill passed to Kings College, Cambridge in the 1440s. By that time the current church of St Michael was about 150 years old.

The church consists of a west tower nave, and chancel, but only the lowest parts of the tower and an internal arch remain from the original 13th century building. The top of the tower was added in the 15th century, and the rest of the church was rebuilt in the 1760s. Then in 1862, the chancel was lengthened.

Leaning against the north wall of the nave is an ancient stone coffin, its size suggesting that not all medieval people were shorter than modern citizens!

The interior has two main features of historic interest. The first is the chancel arch, which is beautifully carved with rich, deep mouldings and clusters of shafts.

Even more fascinating is a set of carved wooden panels set on the north wall of the chancel. The panels came from the redundant church at Monkton Deverill and were once part of a pulpit given by Lord Charles Thynne in 1880.

There are 4 panels, sowing in order Adam in the Deep Sleep, Eve being made from Adam's rib, Temptation and the Tree of Knowledge, and the Angel driving Adam and Eve from the Garden of Eden. The carvings are probably Belgian, and likely date to the 17th century. The quality of the woodwork is simply astonishing. 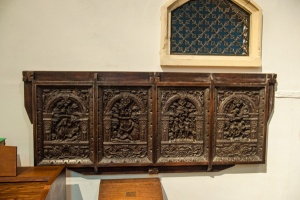 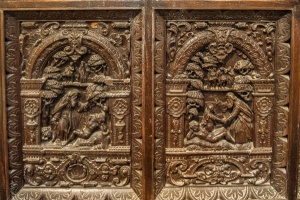 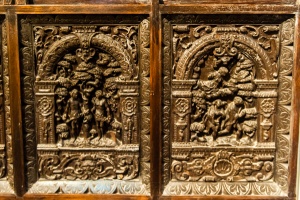 One other feature of note is the simple Norman font, with a chevron design around the rim. This was brought to Brixton Deverill from the church at Imber, when that village was taken over by the military. 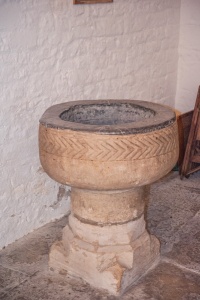 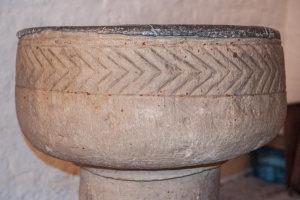 There is a very touching set of stained glass in the nave. Facing each other across the east end of the nave are windows commemorating two sons of Rev Emanuel Strickland. Edward Strickland, Emanuel's third son, drowned in a storm at sea in 1861, aged just 16.

His younger brother James died in Calcutta in 1866, aged just 17. Rev Strickland's own memorial window is on the north wall of the nave, beside his son's. Though the glass is not exceptional, seeing the sad story of one family's history is quite touching.

Other memorials include a neoclassical mural tablet to Rev John Rogers (d. 1773), and a simple wall monument to the Frowd family, spanning three generations, beginning in 1776 and ending in 1813.

We found St Michael's church open when we visited. 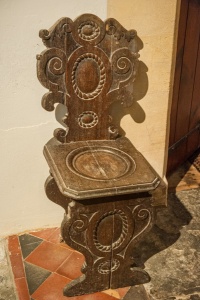 Wooden chair in the chancel 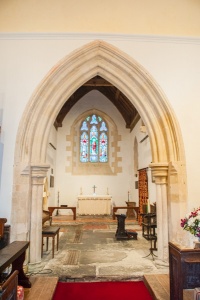 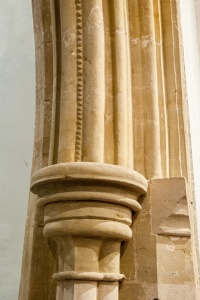 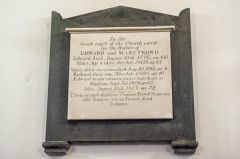 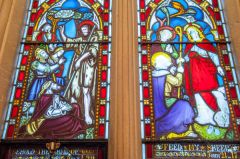 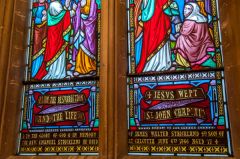 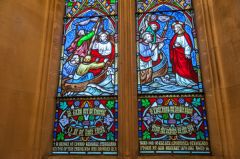 More self catering near Brixton Deverill