HERITAGE HIGHLIGHTS:   Located beside medieval Malmesbury Abbey, and once the site of the Abbot's garden 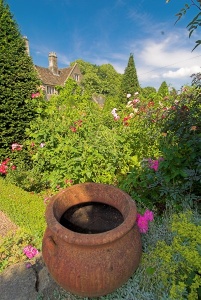 Abbey House is, as you might expect from the name, located immediately beside historic Malmesbury Abbey. This glorious, colourful garden was originally home to the garden for the powerful Abbot of Malmesbury.

One interesting feature is the Knot Garden, an arrangement of formal beds about a well, shaped like a Celtic cross (see photo), in imitation of St Martins cross on Iona. It is rumoured that a Celtic monk from Iona was responsible for founding the Abbey at Malmesbury.

Equally unusual is the Dinosaur Grove, planted with trees that prospered when dinosaurs lived. The extensive rose beds echo the style popular in Tudor times. 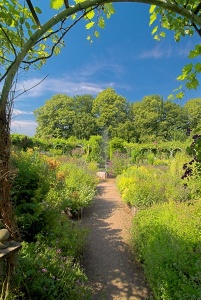 The exact date that Abbey House was built is not known for certain, but it was probably around 1542, just a few short years after the Abbey at Malmesbury was dissolved by Henry VIII. Following the Dissolution, a wealthy merchant named William Stumpe bought much of the Abbey property and helped the town buy the Abbey buildings to serve as the parish church.

Stumpe built Abbey House n the site of the house used by the former abbots of Malmesbury Abbey. It seems likely that the house was used as a Governor's residence during the English Civil War. The house was remodelled and extended in the early 20th century, but the bulk is in its original state.

I think these lovely gardens are an absolute must-see. Add the historic interest to the beauty of the gardens and you have an unbeatable combination. I loved visiting; admittedly it was a glorious summer day but I think I'd have enjoyed the gardens even on the dullest day! 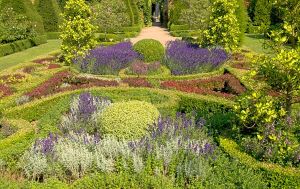