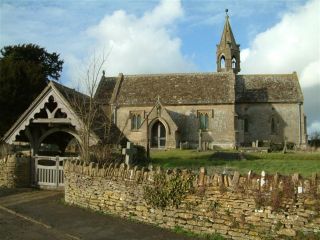 Leigh Delamere Church
The church of St Margaret of Antioch in Leigh Delamere dates to 1846. It was built by James Thomson, who incorporated parts of an earlier 12th-century church into the new building. Thompson also designed nearby Grittleton House.

Thomson created a splendid mock-medieval building with a richly decorated interior and an unusual, columned bell turret. The reredos is perhaps the most impressive feature of the church, which is illuminated by 19th-century stained glass in a huge west window.

The original church at Leigh Delamere was built around 1190 in Early English style, though it had several earlier Romanesque features. The first recorded vicar was John de la Mare in 1301. By the Victorian period, the 12th-century was in such a poor state of repair that it was cheaper to rebuild it than restore it.

So in 1846 Joseph Neeld, the owner of the Grittleton estate, brought in the architect James Thompson to completely rebuild it. Thompson carefully disassembled the old church, numbering each stone so that they could be reused to build the school at Sevington. As for Neeld, he and his family seem to have regarded the church as their private chapel. Joseph Neeld was the first of the Neelds to be buried in the family vault under the chancel.

An amusing story of the rebuilding says that there was an alms chest in the church that held some small coins. The workmen contrived to extract the coins using a piece of bent wire. The irked vicar inserted a mushroom-shaped guard inside the box to prevent similar theft in future.

Another story revolves around the same alms box. In 1850 a young woman from Colerne called at the rectory and asked Canon JE Jackson to be married in Leigh Delamere Church. When Canon Jackson asked her why she wished to be married in a parish church so far from her home she explained that she had heard a story there was money in the alms box that would be given to the first woman to be married there. When Jackson assured her the story was untrue the woman promptly said that in that case, she had no wish to be married.

One of the best interior features is a large west window with colourful stained glass by Thomas Wilmshurst (1806-80).

The church is now no longer in regular service and is preserved by the Churches Conservation Trust. As of this writing, it is open daily, but it is always a good idea to check the official website before planning a visit.