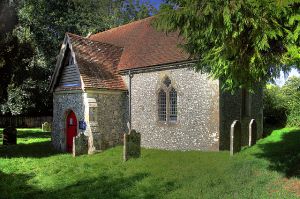 Borbach Chantry Chapel
The village of West Dean is on the border between Wiltshire and Hampshire. The current parish church dates to the Victorian period, but tucked away in a wooded glade nearby is a wonderful medieval treasure in the form of the Borbach Chantry, a 14th-century chapel that was once attached to the medieval parish church.

The chantry was established by Robert de Borbach in 1333. Borbach gave money for a priest to say daily prayers for his soul, and a list of nobles that included Edward I, Edward III, the Earl of Gloucester and Hereford and his wife, the Bishop of Salisbury, and members of the Ingham family.

The old parish church was torn down in 1868 and a new building erected nearby, but the chantry was preserved. Parts of the medieval church were moved to the new building, and some items were transferred to the chantry. Among the latter were a collection of 17th-century memorials to the Evelyn family of West Dean manor. These monuments form one of the finest collections of Jacobean memorials in any English parish church.

The earliest of the Evelyn tombs is an alabaster monument of 1627 to John Evelyn and his wife, with their eleven children kneeling on a frieze beneath them. The period costume is portrayed in great detail. A local tale says that all eleven children were born blind, but there is no historical record to back this up.

Nearby is another alabaster memorial, this time with a bust in marble, to Elizabeth Tirell, who died in childbirth in 1629. An equally poignant Jacobean monument is that of George Evelyn, who died only age 6 in 1641.

Perhaps the most imposing of the Evelyn monuments is the marble tomb of Robert Pierrpont, Earl of Kingston, who married into the Evelyn family. Pierrepoint's granddaughter, Lady Mary, eloped here in 1712 to marry Edward Monatagu.

The chantry is in the care of the Churches Conservation Trust, it is generally locked but there is a keyholder nearby so access is not a problem. The Trust website recommend that you ring the keyholder first to ensure that you will be able to get the key.