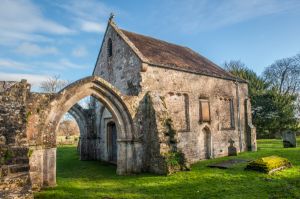 Also known as Sutton Veny Old Church, St Leonards is a medieval church set in a peaceful location. When the floor of the church began to suffer from subsidence in the Victorian period, St Leonards was replaced by a more modern building dedicated to St John the Baptist, and St Leonard's chancel was used as a mortuary. The nave, transepts, and crossing now stand roofless and open to the elements.

Only the chancel remains roofed, but within the interior you can still see numerous medieval and later features, including wall memorials, font, and benefaction boards. The crossing arches and lancet windows on the north wall are 13th century.

Among the oldest memorials is an inscription to Margaret Bayly, the wife of a rector, who died in 1693. Nearby s a small heart-shaped tablet to 'Anthony Long, gentleman', who died in 1676. On the south wall is a memorial to George Martin (d. 1815), who served as a Colonel with the East India Company and died at Bellary, in the East Indies. 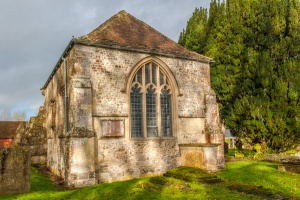 The east end of the chancel

It is fascinating to read the language of the memorials. The inscription to Rev Edward Taylor (d. 1763) tells us that he was educated at 'Brazen Nose College in Oxford' (Brasenose) where he 'was early distinguished by his abilities as a scholar and afterwards rendered him an ornament to his profession'.

Outside, the walls of the old church are crumbling away, though they still stand to a good height in places. The church is first mentioned in 1240, though it seems that it must have existed for some time before this.

The church is in the care of the Churches Conservation Trust, and when we visited there was a sign on the chancel door with a map of local keyholders. The nearest keyholder was at the house nearest the church, with a large lion-shaped knocker. It took several attempts, but eventually we knocked loudly enough to raise the keyholder.

The interior is small, and of interest mainly for the large number of memorials on the walls. A large amount of the interior space is occupied by a large parish bier. An information plaque tells that the bier was used to carry the dead to St John the Baptist church, which replaced St Leonards in 1868.

The bier was made by the Barter brothers, who lived on Duck Street and combined the trades of wheelwright, blacksmith, and undertaker. The forge they used still stands and is in good condition. The bier was usually kept here, in the chancel of St Leonards, after the chancel became a mortuary. The bier was made in the 1890s and remained in use until 1968.

But in this case, the ruined parts of the church are just as interesting as the interior, especially the exposed vaulting of the crossing. It was fascinating to see the interconnected series of vaults that once supported the tower structure.

The location is wonderful; in an idyllic little village, looking out over farm fields, at the western end of the picturesque Wylye Valley. 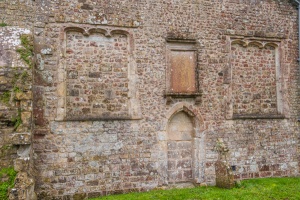 Exterior of the chancel wall 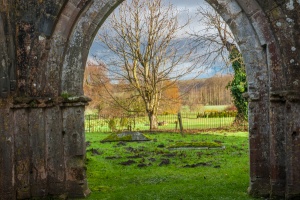 Looking through the crossing arch 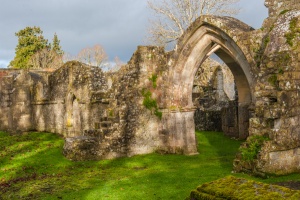 Ruins of the nave, south wall 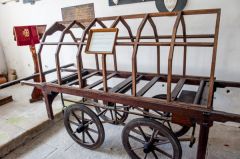 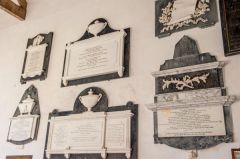 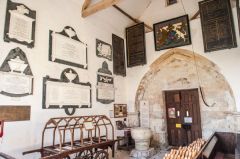