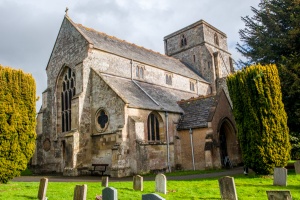 The church of St Peter and St Paul dates to the late 11th century. Around 1115 Henry I gave it to Salisbury Cathedral, and by 1160 it was a collegiate church with a dean and 4 prebendaries. The college founder may have been Jocelyn de Bohun, Bishop of Salisbury, and was further endowed in 1165 by Empress Matilda, mother of Henry II. By the 13th century, the Dean of Salisbury became the Dean of Heytesbury, and the church was his personal property.

Most of the church dates from the 12th-14th centuries, though it has been very obviously restored in the Victorian period. Pevsner describes Heytesbury as 'over-restored', and certainly it is hard to ignore the efforts of the Victorians when you visit the church. 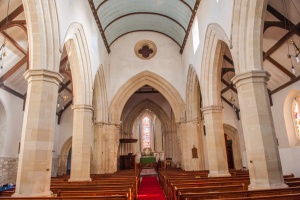 On the other hand, when you look at the recorded history of the church it is easier to understand why the Victorian restorers stepped in. By the 18th century, the church was in such poor condition, and it served such a dwindling congregation, that a solid wall of stone was built in front of the transepts, so that only the nave was accessible.

We owe it to the efforts of the Victorians that the church has survived at all, but it must be said that they swept away many of the original medieval features. William Butterfield, one of the foremost architects of Victorian churches, was employed in 1865 to restore the church. He removed all the galleries and the dividing wall, re-opened the chancel aisles, and rebuilt the aisles. Butterfield inserted the fine marbled font in the south aisle. 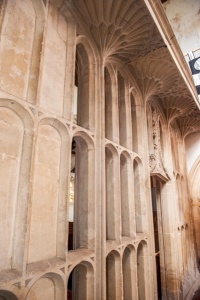 The finest and most appealing interior feature is a stone screen to the Hungerford Chapel (the north transept). The screen dates to the late 15th century and has beautiful vaulting. In the centre of the screen is a heraldic panel showing 3 sickles, the badge of the Hungerford family.

The Hungerford Chapel was founded in 1421 by Sir Walter Hungerford, who was a friend of Henry V and fought at the Battle of Agincourt in 1415. Hungerford later served as Treasurer of England under Henry VI. Lord Hungerford himself is buried at Salisbury Cathedral, however the stone screen was probably built by his grandson, also amed Walter, who was knighted at Bosworh by Henry VII

There are 2 memorial of interest; one is to David Williams, who founded the modern Sunday School movement. Williams served as vicar of Heytesbury from 1795-1836. The other memorial is to William Cuningham, an antiquarian, who lived in Heytesbury from 1775 until his death in 1810.

Cunningham pioneered the scientific excavation of Wiltshire's prehistoric sites, and exhibited the finds he unearthed in the summerhouse of his residence in Heytesbury. His most famous finds were purchased by his collaborator, Richard Colt Hoare, on his death, and exhibited at Stourhead House, hence they were termed the Stourhead Collection.

In the north aisle of the chancel is a 1623 memorial to the Moore family. There is also a neoclassical wall monument to Richard Snelgrove (d. 1650).

St Peter and St Paul was open when we visited. At first glance I was staggered by the imposing central tower. The interiors were a typical example of Victorian restoration, done to a very high quality by William Butterfield. The font in particular was a beautiful piece of 19th century work. There are really 2 main historic features to mention.

One is the fragmentary remains of the Moore family in the north chancel aisle. The effigies are a striking reminder of 17th century values and style. Look for the small effigy of a child behind the two parents.

The other historical feature is the stone screen fronting the Hungerford chapel. at first glance I assumed it was part of the Victorian restoration; the craftsmanship was so beautifully performed. The vaulting on both sides of the screen cornice is simply wonderful. 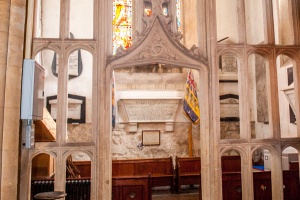 Detail of the Hungerford screen 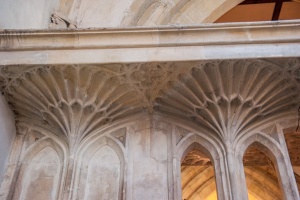 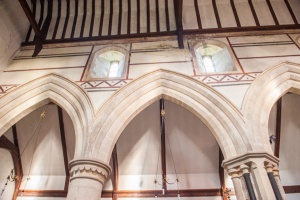 More self catering near Heytesbury

More bed and breakfasts near Heytesbury