HERITAGE HIGHLIGHTS:   The grave of William Williams Pantycelyn, one of Wales' greatest hymnists 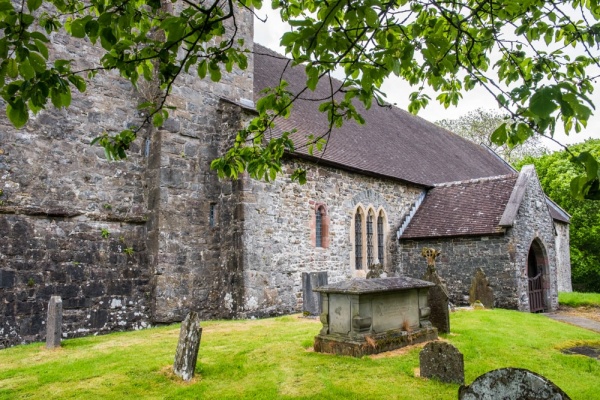 On the outskirts of Llandovery, partially contained within the earthen ramparts of a Roman fort, stands the 12th-century church of St Mary, the former parish church of Llanfair-ar-y-bryn. The fort not only stands inside the Roman fort, it was built with stones salvaged from the fort ruins.

The fort is thought to have been an auxiliary fort known as Alabum, established in the 70s AD.

The church served first as an outpost of Malvern Priory in Worcestershire, and later as a chapel of ease for Llandingat. Though St Mary's is within the parish of Llandingat, it actually served as a parish church for the extremely large parish of Llanfair-ar-y-bryn, about 1 mile to the north, until 1833 when a new church was built at Cynghordy.

The church is laid out on a traditional plan, with a large west tower, a nave and chancel without a division between them, and a south porch. To this basic layout, a vestry and boiler room were later added on the north side. On the south chancel wall you can clearly make out remains of a lost chapel.

The 12th-century church was rebuilt in the 13th century and again after it was damaged in Owain Glyndwr's revolt in the early 15th century. A document from 1484 shows that Richard III approved a grant, probably to help rebuild the tower, screen, and windows. 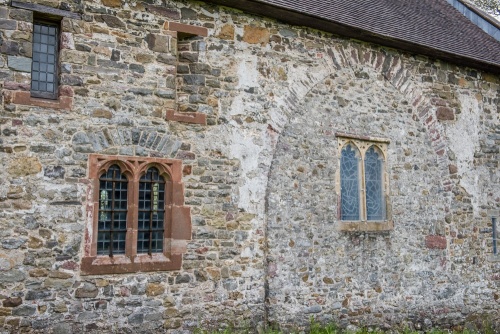 The west tower is 15th century, and the south porch perhaps a century earlier, though it was rebuilt in the 19th century. The church was comprehensively restored in the early 20th century by WD Caroe, who removed the Victorian east window and replaced it with an original 15th-century window from the nave.

The nave roof is 17th century and you can see faint traces of medieval wall paintings in both the nave and chancel as well as a partial 17th-century painting of Biblical text.

The font is 15th century, carved from red conglomerate stone, though it sits on a 20th-century base. The altar table dates to the 17th century as does the credence table. There is a brass eagle lectern of 1896 and late 19th-century chancel stalls.

In the south porch is an early 19th century memorial without a name and a red stone tablet to Thomas Powell (d. 1797). On the east side is a plaque to Rev John Williams of Pantycelyn (d 1828) bearing the epitaph 'A sinner saved'. Also in the porch is a tablet commemorating Thomas Jones of Ystradwallter and his wife, who died in 1762 and 1767 respectively. 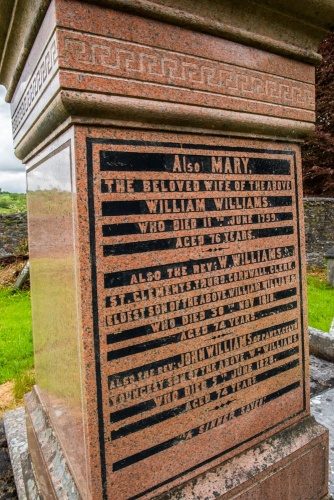 In the north-west part of the churchyard is the grave of poet and hymnist William Williams Pantycelyn, a leader of the Welsh Methodist movement and perhaps the most famous native of Llandovery. He is best remembered as the author of Arglwydd, arwain trwy'r anialwch, which was translated into English as the hymn Guide me, O Thou Great Jehovah.

Much of the stained glass is 20th-century work, including 3 windows by the famous studio of CE Kempe.

St Mary's is listed Grade I for its heritage interest, with the listing calling it 'a substantial medieval church with intricate history of building and change from the C12 to the C16, with fine W tower and high degree of survival of medieval architectural features'. 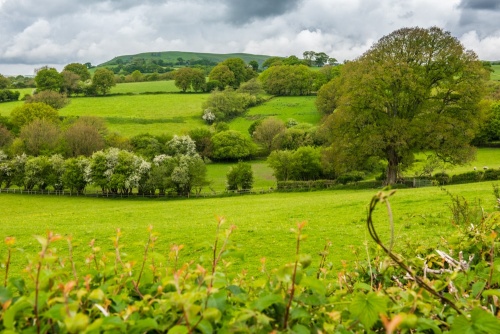 Alabum Roman fort from the churchyard

Finding St Mary's is a bit of a challenge. Neither the church nor the Roman fort is signposted and a good OS map is definitely helpful. The church is located on a minor road off the A483 Llanfair Road on the north-eastern edge of Llandovery, well away from the town centre. here is no dedicated parking for the church - at least none that I could find - but it is easy to find parking along the lane.

The A483 follows the old Roman road for several hundred yards south-east of the church before curving up towards Llanfair Farm and then curving back down again to rejoin the Roman road.

The church was locked the last time we visited and sadly, there was no indication of when - or if - it might be regularly open to visitors. 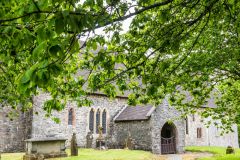 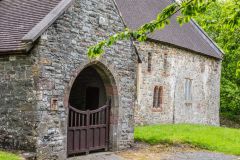