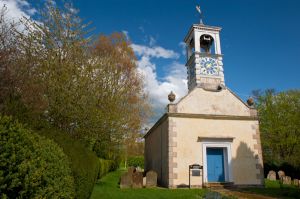 A lovely, stuccoed Georgian church, built in 1763 by Charles Peers in elegant classical style. The interior is an 18th-century delight, with a west gallery, raised on Italianate columns, overlooking box pews.

The village of Chiselhampton grew up around an important crossing point on the River Thame (not the Thames, but a tributary of that larger river). The manor dates from before the Domesday Book and around 1530 it was owned by the Doyley family.

The Doyleys were important in Oxfordshire high society, with two members of the family becoming High Sheriffs of the county. However, the Doyleys fell into debt and in 1748 were forced to sell Chiselhampton to Charles Peers.

The Peers family came from London where they had prospered as grocers and hosiers. Charles Peers's father had risen to become Lord Mayor of London. Charles's wife Katherine was an Oxfordshire native, which may explain why he abandoned London in favour of rural Oxfordshire. Peers built a new manor house overlooking the river.

St Mary's church in Chiselhampton dates to at least 1146. We know very little about that medieval building, as very few historical records exist describing it before the 18th century. We do know that during the medieval period it served as a chapel annexed to Dorchester Abbey.

By the middle of the 18th century, the chapel was in a ruinous condition, and a contemporary account says that the parishioners could not meet without 'manifest hazard to their lives'. Charles Peers applied for permission to tear down the old chapel and re-use the building materials to erect a new building some 200 yards to the west.

The new church was consecrated on 22 August 1763 and dedicated to St Katherine, possibly in honour of Peers' wife. We do not know for certain who the architect was, but it seems quite likely that Samuel Dowbiggin, who was engaged in building Peers' new manor house, took a hand in the church.

The result is one of the best examples of Georgian church architecture in Oxfordshire. Remarkably, it has survived with very little alteration, with the exception of roof restoration in 1882 and repair to the bell turret in 1894.

When the roof needed repair in 1952 the Poet Laureate John Betjeman wrote a poem to help raise funds for the restoration of St Katherine's, noting 'the noble altarpiece, With carven swags array'd'.

Sadly, diminishing population meant that the church was eventually declared redundant in 1977 and passed to the Churches Conservation Trust.

St Katherine's is a simple rectangle with a rather odd bell turret, incorporating a clock, which looks more like the sort of classical tower you find on Georgian stable blocks. The lower stage of the turret has clock faces on the south, west, and north faces, with a blue painted face and gilded hands.

The west face displays the date 1762 in gold lettering (when the tower itself was built, as the church was not consecrated until the following year).

The upper stage houses a ring of three small bells, and the entire turret is topped by a gilded weathervane lettered with the words 'St Katherine'.

A stone urn garlanded with flowers stands at each corner of the building, which is entered through a rather plain west door. There are four very large rounded windows on the south wall, but none at all on the north.

Immediately on entering you pass under the west gallery, supported on Tuscan pillars. The interior is aisless, with a simple passage between two rows of box pews leading to a higher, grander squire's pew beside the pulpit.

This is a beautifully carved Jacobean creation with wood panelling and is one of the few furnishings from the old medieval church. At the west end is a very small white marble font supported on a single wooden column.

There is no division between nave and chancel. The simple communion table is topped with a grey marble mensa, and behind it is a three-panelled reredos of oak, carved with flowers and scrolls. From left to right the panels are lettered in gold with the Lord's Prayer, Ten Commandments, and The Creed.

With one exception the windows have clear glass. The exception is a small section of modern stained glass depicting the Peers coat of arms. There are three elegant late 19th century chandeliers and 18th-century candle brackets on the walls. Also on the walls are monuments to members of the Peers family.

Immediately east of the pulpit is the memorial to the church founder, Charles Peers, who died in 1781.

St Katherine's is not a stunning architectural achievement; rather, its appeal lies in the fact that it is a quiet country church built in a beautifully simple and elegant Georgian style, blessedly little altered by the passage of time.

There is limited parking for two or three vehicles in a layby on the east side of the B480 (heading south). The church is supposedly open during daylight hours, but when we arrived it was locked. A notice outside the door directed us to the pub in the village, a few hundred yards south, where we were able to borrow a key. 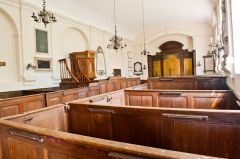 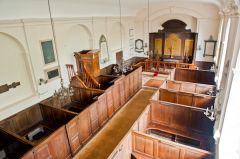 The Angel Restaurant with Rooms - 8.5 miles
Aylesbury, Buckinghamshire
Stay from: £70.00