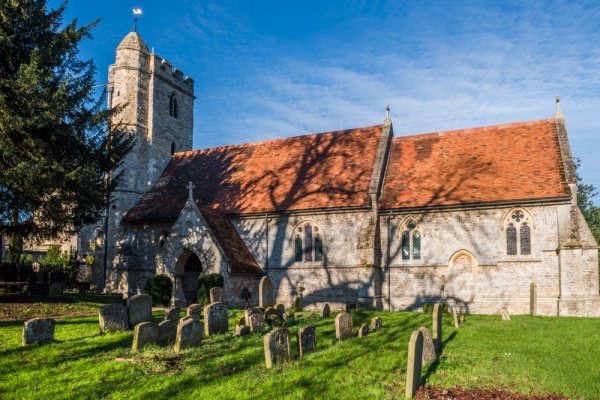 The rural church of St Peter stands at the foot of Wittenham Clumps, topped by an Iron Age fort, and beside an attractive manor house. We do not know exactly when the church was built, but the oldest part of the present building is the 14th-century tower, with a staircase turret projecting on the south side. The church was extensively rebuilt in 1862 by Rector John Hilliard. The east window acts as a memorial to Hillard's father, Rev. FJ Hilliard.

The interior features a carved oak pulpit dated to 1634. the pulpit has had a chequered history. It was removed during the Victorian restoration and installed in a church at Northbourne, Didcot. That church was rebuilt on a new site in 1980 and the pulpit was returned to its original home, some 346 years after it was originally installed.

The oldest historic feature is the font, which dates to the 15th century. On one side you can see a depression which may have been a receptacle for holy oil, or, more likely, where a lock for the font cover was attached. 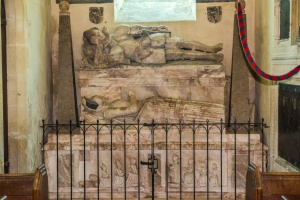 By far the most interesting feature at Little Wittenham is an alabaster monument under the tower to Sir William Dunch and his family. Dunch was a native of Little Wittenham, and was baptised at St Peter's church in 1578 and died in 1612, and the young age of 38.

During his short life, Dunch served as MP for Wallingford. His effigy is typical of the early 17th century. It shows him reclining on one side, clad in armour. His wife's effigy forms part of the monument, though she is shown recumbent.

Beneath the couple, set against the side of the monument, are figures of seven kneeling children and two babies in swaddling clothes. One of the babies rests its head on a skull, representing an early death. Several members of the Dunch family served as MPs for Wallingford. Perhaps the most famous was Edmund Dunch (1657-1719), a prominent Whig politician who served as Queen Anne's Master of the Household and was a member of the infamous Kit-Kat Club.

The Dunch monument was originally erected in the family chapel, which used to stand against the south chancel wall. The chapel was pulled down when it became decrepit, and the family monuments were moved under the tower. 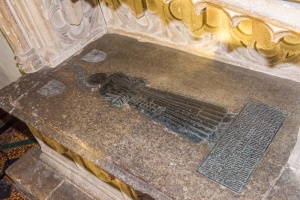 The church is full of fascinating memorial brasses. In the sanctuary is a Purbeck marble tomb to Geoffrey Kidwelly (d. 1483), surmounted by an incised memorial brass. In the chancel floor is a brass to a rector named John Churmound, who died in 1433. Churmound is depicted in full mass vestments. Nearby is another 15th century brass to David Kidwelly (d. 1454). Kidwelly served as an Usher of the Hall to Henry VI. In the south chancel is a brass to Cecilia Kidwelly, wife of Geoffrey (d. 1472).

Near this is a touching little brass to Anne Dunch, an infant daughter of Henry and Anne Dunch, who died in 1683. 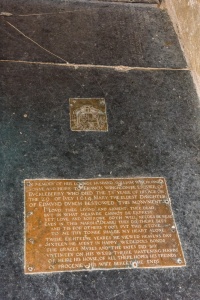 Set against the north wall of the tower, near the Dunch memorial, is a brass to William and Mary Dunch and their 2 sons. William, who died in 1597, was the grandfather of the Sir William Dunch depicted in the alabaster memorial.

The earlier Dunch served as Auditor to the Mint in 1546 under Henry VIII and was reappointed to the same task under Edward VI. Elizabeth I made him an 'Esquire extraordinary' and gave him the Manor of Little Wittenham. Dunch served as Sheriff of Oxfordshire in 1570. He built the family chapel mentioned earlier and was buried there in 1597, though the date is missing from his brass.

Above the Dunch brass is yet another memorial brass, to John Barns, shown in armour, and his niece Mary, who married the first William Dunch.

The church is in an idyllic location beside the manor house, an 18th-century red-brick house in Queen Anne style, with Victorian additions. Next to the manor house is Barn Cottage, dating to the 17th century. The combination of church, cottage, and manor is one of the most picturesque you will find along the Thames.

The church is easily reached from the minor road through Little Wittenham village and is immediately opposite the start of the popular path that leads up Wittenham Clumps. It is also on the Thames Path, easily reached from nearby Dorchester across the river, and immediately beside Day's Lock. We opted to walk from Dorchester, and really enjoyed the experience, though I would definitely suggest good waterproof footwear, as the riverside path can be soggy in places. 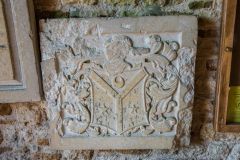 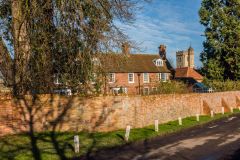