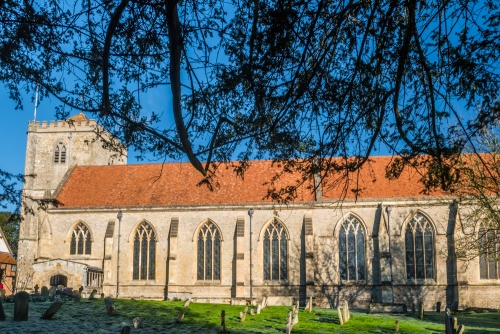 One of the earliest Christian sites in Britain, Dorchester Abbey stands on the site of a 7th-century Saxon cathedral. The large church is all that remains of an Augustinian abbey, which was founded in 1140. 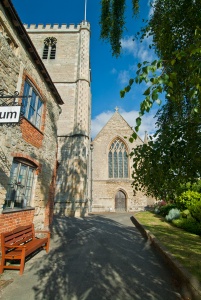 The picturesque village of Dorchester on Thames is home to the largest public building in south Oxfordshire, the parish church of St Peter and St Paul, more commonly known as Dorchester Abbey.

This quiet Thames village was the site of one of the earliest successful Christian missions; in 635 AD Pope Honorius I sent Bishop Birinius to convert the people of Wessex to Christianity. Just south of Dorchester at Church Nob, Birinius preached to King Cynegilis.

The bishop proved to be persuasive, and Cynegilis was baptised - perhaps in the Thames - and he granted Birinius land at Dorchester to build a cathedral church.

In those days a cathedral was not a grand structure like the later medieval cathedrals that survive today; Birinius's church would have been a very simple affair of wood. The most likely site of this early church is the site now occupied by the abbey. Birinius was buried at Dorchester in 650 AD.

After the death of Birinius, the bishopric was split and transferred to Lindsey and Leicester, but in AD 870 Leicester was under threat from Danish attack and the bishopric returned to Dorchester. To get some sense of how important Dorchester was, the diocese administered by Bishop Wulfwig in 870 stretched from the River Thames to the Humber River near modern Kingston upon Hull. 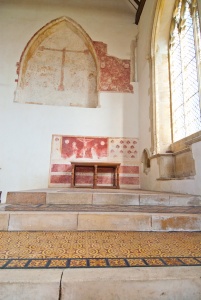 The first Norman bishop, Remigus, rebuilt the Abbey church, and some of the work begun by Remigus can still be seen. However, the fortunes of Dorchester was about to take another turn. The village remained a quiet backwater, and the growth of other urban areas made a move of the bishopric inevitable.

Sometime between 1070 and 1086, the bishopric moved to Lincoln and Dorchester reverted to a simple parish church. In 1140 Dorchester was refounded as an Augustinian monastery, and pilgrims flocked to Dorchester to see the relics of St Birinius.

This was a time of prosperity for Dorchester, and the church was extended greatly, with the present tower and aisles added, a shrine for the saint's relics, a People's chapel, and a great Jesse window. The monastery was dissolved by Henry VIII in 1536 and the relics of St Birinius were scattered.

This is the first area of the church you come to on entering. The chapel was added to the existing monastic church in 1340 to serve as a parish church for the inhabitants of Dorchester. There are no pews here, and the chapel really has a lovely sense of space.

Within the People's Chapel is the Norman lead-lined tub font, with a beautifully carved frieze decorating the top of the tub. The frieze shows 11 figures seated beneath an arcade. This probably shows the 11 apostles (leaving out Judas). The font dates to 1170 and is one of the finest surviving lead fonts in the country.

During the medieval period, many monastic churches had lead fonts, but this is the only example in all of England to survive the Dissolution of the Monasteries.

Against the east wall is a beautifully vivid set of 14th-century wall paintings. 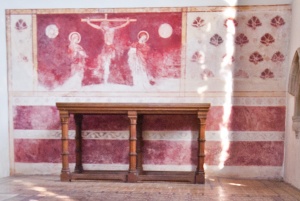 Around 1340 the sanctuary was extended eastward, and a lovely new east window inserted. This window, with its beautiful tracery, features stained glass depicting a Tree of Jesse, or family tree of Christ. The stained glass dates to the 14th century and was collected from several places around the church.

The rose window is by famed Victorian architect William Butterfield, who was called in to restore the church in 1846. Set into the floor in front of the altar is a memorial brass to Abbot Bewfforeste (died c. 1510). It was he who donated the carved choir stalls to the abbey church. On the south side of the sanctuary is a lovely three-seat sedilia.

These beautifully carved and canopied niches offered reserved seating for the Bishop and important church officials. The sedilia is carved with figures representing the Seven Deadly Sins.

Off the north wall of the chancel is St Birinius's Chapel, built in the late 13th century in lovely Decorated Gothic style.

In this chapel is the oldest piece of stained glass at Dorchester, dating to about 1250. This glass shows Birinius being blessed by Archbishop Asterius of Milan before setting off on his missionary journey to England. One wonders how Birinius felt, being sent to this remote part of Europe? 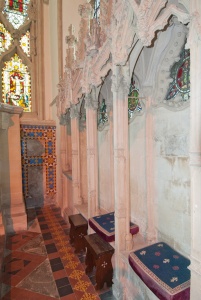 Remnants of the medieval shrine of St Birinius are gathered in the Lady Chapel. The shrine was destroyed during the Reformation, but large sections of the shrine's elaborate vaulting were discovered in a blocked-up doorway in the 1870s. These were reassembled, rather like a giant jigsaw puzzle, in 1964.

Nearby is a beautifully preserved effigy of a knight in full armour. This is probably Sir William de Valance the Younger (d. 1282) and is one of the finest 13th-century effigies in England, with wonderfully carved costume details. Traces of original 13th-century paint can be seen in the folds of the knight's cloak.

Other effigies in the Lady Chapel include John de Stonor (d. 1354). Sir John served under Edward III as Lord Chief Justice, and his descendants still live at the nearby stately home of Stonor Park. There is an early 14th-century effigy of a bishop and a late 14th-century effigy of a knight wearing plate armour, possibly a member of the Segrave family.

One unexpected feature is a small replica of a carving found on the tomb of St Agilbert in Jouarre, France. The original carving is one of the finest pieces of 7th-century sculpture in Europe - the replica is pretty impressive, too! Agilbert served as Bishop of Dorchester from AD 650-660. 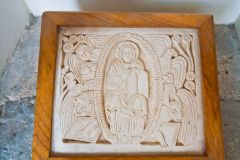 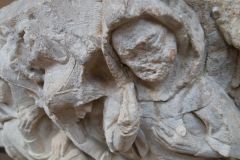 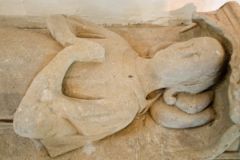 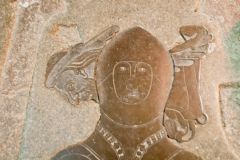 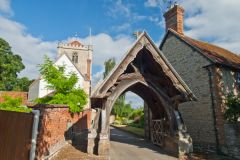 More self catering near Dorchester Abbey

The Angel Restaurant with Rooms - 11.4 miles
Aylesbury, Buckinghamshire
Stay from: £70.00