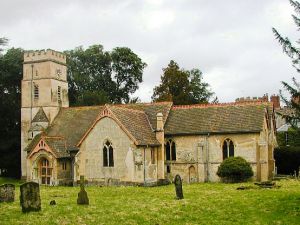 Shirburn, All Saints Church
All Saints church stands in the shadow of historic 14th-century Shirburn Castle, home of the Earls of Macclesfield. The church dates to the 13th century, but incorporates parts of an earlier Norman church.

The church is composed of a nave, chancel, south transept, north transept, south porch, and a slender west tower, all built in flint with stone dressing. Above the west window is a Romanesque tympanum which may have been moved here from the original south door. The interior of the same window shows a Norman pattern of diaper carving.

Both stones were found under the floor during restoration work in the Victorian period and inserted in their current locations. The north and south arcades are 13th century, but much else was altered during the restoration in 1876. One older item that remains is the medieval tub font.

There are several older monuments, including an altar monument to Richard Chamberlain, dated 1493, and a marble memorial to Sir Robert Chamberlain (d. 1602). There is a brass to William Boudre and his wife Joan dated 1498, and a very large number of 17th and 18th-century wall tablets and other memorials.

Though there is much Victorian restoration, the original medieval feel of the place is still very much evident.

More self catering near Shirburn, All Saints Church >>

The Angel Restaurant with Rooms - 8.1 miles
Aylesbury, Buckinghamshire
Stay from: £70.00

More bed and breakfasts near Shirburn, All Saints Church >>