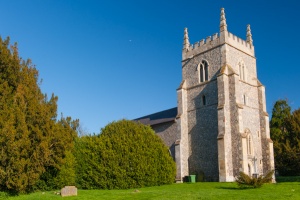 Aston Rowant is a small village in lovely countryside between Watlington and Princes Risborough. The parish church of SS Peter and Paul stands on a site used since at least the 11th century. Two rounded Saxon windows are all that remain of that early church.

One is set in its original position above the south porch, and the second is in the west wall of the north aisle. The chancel was rebuilt in the 13th century, and in the 14th century a pair of aisles were added to the nave.

Norman corbel heads are still set in the nave walls, rather sadly stranded after the nave was rebuilt. In the north wall is a medieval stained glass fragment depicting an angel wearing a crown. More fragments of medieval glass have been gathered in the east window of the north aisle.

It is possible that more medieval glass was destroyed by Cromwell's soldiers during the Civil War. In the north wall are a pair of tomb recesses in Decorated Gothic style.

These probably held tombs or grave slabs, but now only contain worn coats of arms. The arms have been tentatively identified as those of the powerful Fettiplace family and the Courtenays. Inside a recess s a small medieval brass of a woman, thought to be Elynor Egerley (d. 1508). 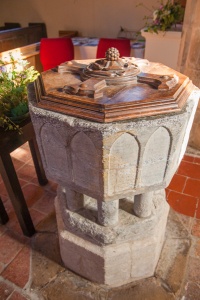 In the north aisle is a very nice painted monument to Lady Cecill Hobbee (d. 1618), showing her kneeling in front of a prayer desk. By the step up to the chancel is a gravestone to Hugh le Blount (d. 1305). Blount gave his name to the village of Kingston Blount.

On the south wall of the nave are brasses to Ralph Coppyn (d. 1437) and his wife Isabela (d. 1441). Partly covered by pews in the middle aisle are brasses with a woman with a hound at her feet.

The very nicely carved pulpit is Jacobean, while the font is 13th century and carved from Purbeck marble. The south doorway is 13th century as well, while inside the porch is a holy water stoup of the same age. The porch itself is 14th century, so the stoup would have been outside the original door, exposed to the elements. 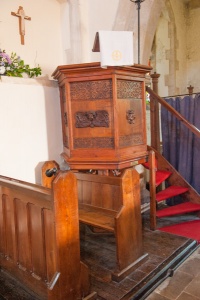 In the chancel are a 13th-century piscina and a squint is set in the north wall of the chancel arch. In the south wall is a louvred 14th-century window (best seen from the outside). This type of window is often described as being made for the use of lepers, who were not allowed into the church. In truth, we do not know why these windows were made.

Also best viewed from the outside is a 14th-century priest's door. Set into the wall is a niche with trefoil arches, holding a stone coffin lid with a floriated cross on the top. This probably indicates the tomb of a priest, and may be as early as the 11th century. 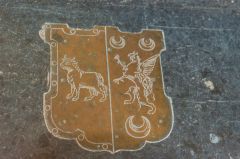 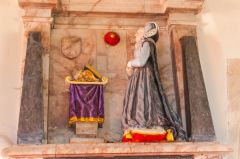 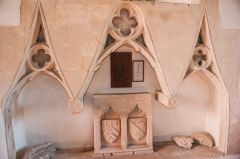 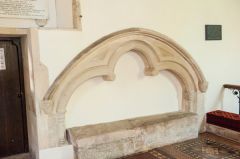 More self catering near Aston Rowant

The Angel Restaurant with Rooms - 6.6 miles
Aylesbury, Buckinghamshire
Stay from: £70.00