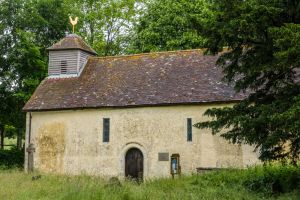 The Saxon church at Little Somborne stands in a rural location beside the grounds of Somborne Park. All Saints is an attractive single cell building, with nave and chancel combined into one structure, and a small wooden bell turret at the west end.

The building is of flint covered in whitewash inside and out. The material for the building is thought to have been brought here from Binstead on the Isle of Wight, probably because good building stone is not readily available in this area of Hampshire.

All Saints dates to the late Saxon period and obvious long and short stonework so typical of Saxon architecture can be seen in the west quoins of the exterior wall. There are also Saxon pilaster strips on both the north and south walls and a possible blocked Saxon doorway on the north wall.

The church was greatly remodelled and extended in the 12th century. The Normans extended the nave westward and added an extremely tiny chancel, no more than a metre in depth (traces of this can be seen outside the current east wall). The current north and south doors are Norman, as is the chancel arch, which probably dates to about 1190.

In the north wall are the remnants of a doorway thought to have linked the church to a 13th-century hermit cell, possibly belonging to Peter de Rivallis (d. 1226). A small selection of carved Saxon stones is also on display. The interior is extremely plain, and the major interest lies in the historic architecture, rather than any furnishings or memorials.

In the churchyard is the grave of Thomas Sopwith, the pioneer aviator who gave his name to the famous World War I fighter plane, the Sopwith Camel. 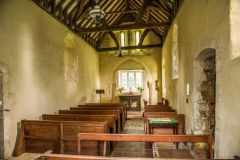 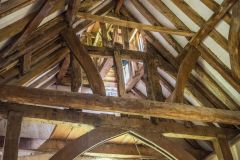 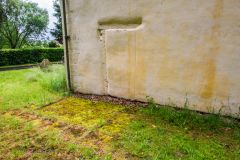 More self catering near Little Somborne, All Saints Church >>

More bed and breakfasts near Little Somborne, All Saints Church >>