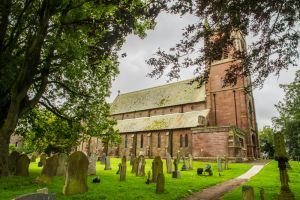 The church of St Kentigern in Aspatria is a Victorian Gothic building, incorporating bits of a much earlier Norman church built between 1130 and 1150. Long before the Norman building, there was a church established on this site by the 6th-century Celtic missionary Kentigern (also known as Mungo).

The church is built of red sandstone and is composed of an aisled nave, chancel with a south chapel, south porch, north vestry, and a sturdy west tower in three stages.

The exterior is very much a Victorian restoration, but ancient stonework lurks within the church. The vestry doorway has a reused Norman arch with original zigzag carving decoration, and the chancel arch is Early English. At the west end is a 5-foot long section of an intricately carved Anglo-Danish cross shaft, and fragments of stonework of the same age, including a hogback coffin which probably dates to the 11th century.

The font is 13th century, and is a square bowl supported on five slender shafts. The bowl is carved with foliage designs, interwoven with the likeness of a serpent. The memorial chapel off the chancel contains a series of 18th-century monuments to members of the Musgrave family of Hayton Castle.

In the large churchyard are a pair of historic treats. To the northwest side of the church is a whitewashed rectangular building, built at least as early as the 17th century as a dovecote. Down the slope of the hill to the north of the church, half engulfed by trees and shrubs, is a holy well attributed to St Kentigern himself.

The well is protected by a much later wellhead and a pair of long berms. There is, unfortunately, no access to the well interior, but the very fact that there is a holy well in the churchyard gives you an idea of the great age of the site.

Aspatria church is normally open to visitors during daylight hours. Our satnav sent us to Church View, a cul-de-sac behind the churchyard, and we had to park along the roadside. There's a much easier way; as we discovered later there is a layby on the north side of King Sreet (the A596) directly outside the churchyard.

The most impressive feature of the church for me is the ornately carved 13th-century font. It truly is an awe-inspiring work of art. And standing almost beside it is the beautifully carved partial remain of a Viking hogback gravestone. Do keep your eyes open as you explore the church. both inside and outside, for there are several finely carved Norman stones set into the later Victorian walls. 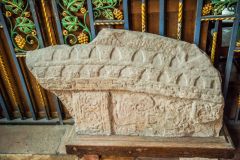 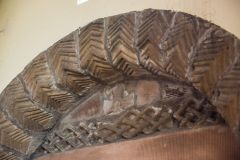 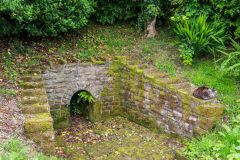