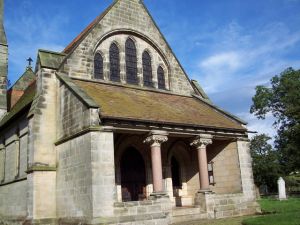 East Heslerton, St Andrew's Church
A large Victorian church in Transitional Gothic style, with elements of Italian design, built by GE Street for Sir Tatton Sykes of nearby Sledmere House. Street built or restored 14 churches for Sykes, but this is the only one where the entire design and furnishing was executed by Street himself.

Street was one of the most prominent civil and ecclesiastical architects of the Victorian period. Apart from his work on numerous churches around the country he is perhaps best known as the architect of the Central Law Courts in London. The most obvious feature of the church is the striking west tower, with a spire that reaches 105 feet. The church was begun in 1873 and completed in 1877.

There is an interesting story about the four large statues that decorate the tower. They were made by James Redfern and represent the four fathers of the Latin church. They were built to ornament Bristol Cathedral, but the then Dean of the cathedral declared that they were too papist and he refused to allow them to be set in his church. Street snapped them up for East Heslerton, and here they are today.

Interestingly for such a large church, the design utilises lancet windows throughout. The church consists of a five-bay nave, western narthex porch, an apsidal chancel, vestry, and baptistry. The attention to detail is fabulous; even the rainwater pipes use handmade decorative nails. The interior features wonderful woodwork.

Unusually, though the church is in the hands of the Churches Conservation Trust, the parish retains ownership of the church walls, lych gate, and lamp standard.