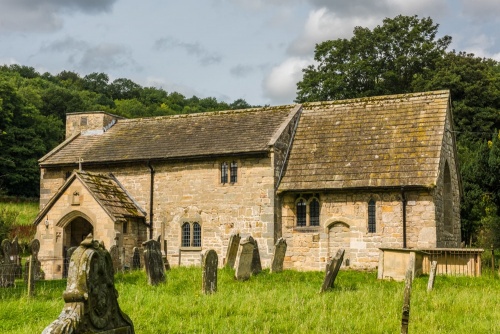 St Hilda's Church in the North York Moors hamlet of Ellerburn is a hidden gem, bypassed by most visitors to the region because it lies up a narrow country lane on the edge of the moors. Yet this quiet country church has a long history and was once the mother church of the area.

We do not know when the first church was built in Ellerburn, but there are carved fragments of Saxon stones built into the church walls. These carved stones probably date to the 8th century.

The small church we see today, with its strikingly high walls, dates to around 1050 and resembles a simple stone farmhouse more than it does a church. The nave measures roughly 30'6" x 17'3" while the chancel narrows to 19' x 12'6". There is a small, square 19th-century bellcote at the west end of the nave. 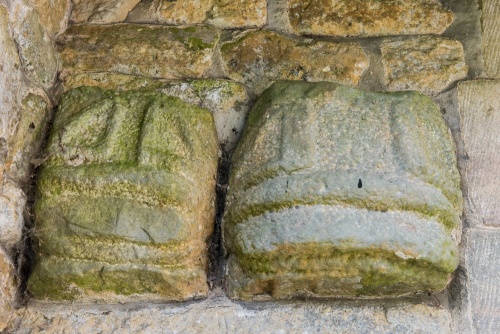 At first glance, the church appears to be Norman, but the unusually high nave walls suggest a Pre-Conquest origin. The chancel arch was rebuilt in the 13th century and a lancet window inserted in the south chancel wall. The church was enlarged in the 15th century when buttresses were added and a chapel built onto the south side of the nave.

The chancel arch may date to the 13th century, but the arch responds are early Norman or even earlier Pre-Conquest. There are several spiral carvings and a dogtooth string course. Look for another spiral carved into the base of a pillar, and a cross incised into a chancel arch capital.

The blocked north door may also be early Norman. The font is early Norman, probably dating to the 12th century. The roughly carved bowl sits on a modern base. The wooden pulpit and its sounding board are Jacobean as are the nave pews. The nave roof is mostly modern but the cladding hides earlier medieval timbers.

The church survived William the Conqueror's 'Harrying of the North' in 1069-70, perhaps because of its remote location. It did not, however, escape the Civil War; the church was used as a stable by Parliamentary soldiers. The medieval building was restored in 1904 by Caroe and Passmore of Liverpool. The company is still in existence and specialises in historic church restoration. 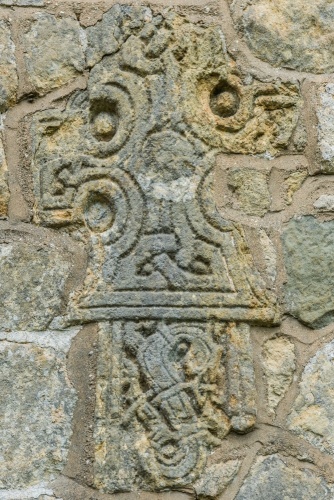 Another two fragments are incorporated into the south wall of the chancel. One is carved with a traditional scroll design and the other is carved with Pre-Norman ropework.

Over the east window is a stone carved with the worn likeness of a stag with antlers.

Too often any carved stone dated to the Pre-Norman period is dubbed 'Saxon', or even more loosely, 'Celtic'. I'm as guilty of this gross oversimplification as other writers. But, let's be clear; the Saxons occupied parts of southern, western, and eastern Britain before the coming of the Normans in 1066.

The north, including Yorkshire, was part of a Viking kingdom and was heavily influenced by Scandinavian, not Saxon, art. So when you see the Pre-Norman carved stones at Ellerburn you are rediscovering an ancient Scandinavian form of art. 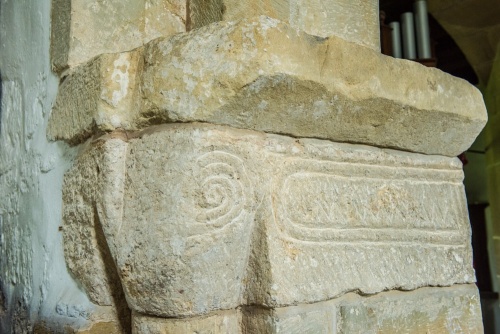 Take the first left fork and proceed for a mile along the lane as it runs beside Thornton Beck and eventually reaches the hamlet of Ellerburn. The church is directly beside the road on your left, opposite the Cosy Nook Cafe, and is impossible to miss. There is a small parking area.

The church is open daily. We discovered the hard way that the door sticks and may be difficult to open, so you might think it is locked. It isn't; just persevere and it should open (eventually). 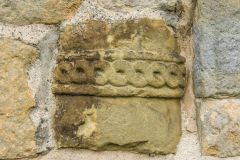 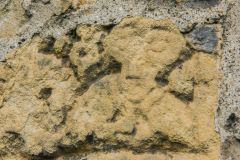 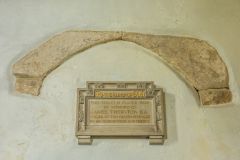