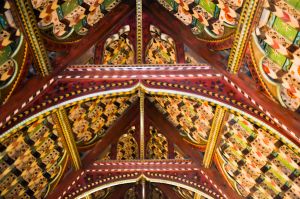 St Peter's church in Helperthorpe is a Victorian building designed by GE Street from 1871 for Sir Tatton Sykes II. The church stands within a small graveyard edged by a retaining wall, like a little enclave cut off from the outside world. The original Street church was extended in 1893 by Temple Moore.

St Peter's began as a chapel in the parish of Weaverthorpe. Beginning in 1871 the medieval chapel was rebuilt by Street, one of the most prolific ecclesiastical architects of the Victorian era. Street raised the chancel, as he often did, making it eight steps higher than the nave.

The striking spire is Street's, modelled on a Surrey shingled spire. The tower incorporates an external stair turret, with a large statue of St Peter set into a niche in the angle of the turret.

The church features stained glass by Burlison and Grylls. The colourful east window depicts scenes of the Annunciation, the Nativity, the Crucifixion, the Resurrection, and the Coming of the Holy Spirit. The north aisle window glass depicts three saints associated with Yorkshire; St Hilda, St Wilfred, and St John of Beverley.

The west nave window, by contrast, has three panels depicting saints linked to the parish, diocese, and the nation; St Peter (shown holding a model of Helperthorpe church), St William of York, and St George. The aisle windows have small panels depicting scenes from the life of St Peter.

Aside from the stained glass, the real interior highlight is the vividly painted ceiling, decorated with floral designs and stars picked out in relief. At the east end of the nave is a wrought-iron chancel screen.

In the churchyard is a striking cross, brought here from Kirkburn. Nearby is the vicarage, also designed by GE Street. 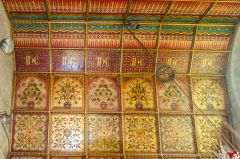