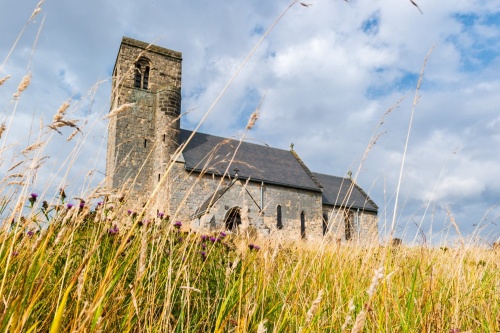 There has been a church in the Yorkshire village of Weaverthorpe since at least the 12th century when it was recorded in a grant issued by the Archbishop of York to his chamberlain, Herbert of Winchester.

The chamberlain, in turn, passed it to his son William, who gave it to the monks of Nostell Priory in 1121. William, dubbed 'FitzHerbert', later rose to become Archbishop himself. The church was erected beside the manor house, high on the north slope of the Great Wold Valley.

The manor of Weaverthorpe goes back before the Norman Conquest and it was recorded in the Domesday Book of 1086 when it was held by Archbishop Thomas II of York. The Weaverthorpe church was recorded as a 'monasterium' or minster church. It had eight daughter churches, most in the Great Wold Valley.

There was almost certainly an earlier church on the same site. A double window high on the south flank of the tower looks distinctly Saxon rather than Norman. 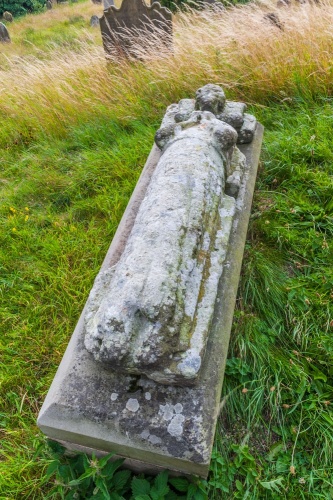 14th-century effigy in the churchyard

The building we see today retains its original Norman layout, with a nave, chancel, and west tower. It is built of coursed ashlar in typical Norman style. It was sympathetically restored by GE Street in 1870-72 for Sir Tatton Sykes, the local patron who was responsible for building a series of Victorian churches across the Wolds.

One of the most interesting historical features at Weaverthorpe is the font, dating to the early 12th century. It may have been installed when the church was given to the Augustinian monks of Nostell in 1121.

It certainly appears on stylistic grounds to have been installed after the church had been finished. It is probably contemporary to the font at Rudston, as it uses the exact same patterns, likely carved by the same workshop. The font is carved with a mixture of octagons and circles.

A fragment of a cross slab is set into the east wall as is a piece of an altar table. In the west face of the tower is a strange carved stone depicting two rows of five stars set into squares. 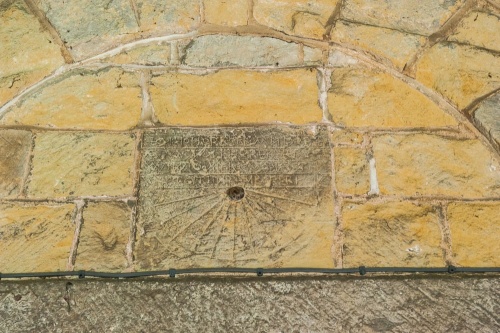 The 12th-century tympanum and sundial

The south doorway is original Norman work. Over the doorway is an inset tympanum carved with a sundial and a worn inscription in Latin that is, unfortunately, truncated. The inscription has been translated as 'In honour of St Andrew the Apostle, Herbert of Winchester built this minster in the time of kiâ?¦'.

Presumably, that sentence would finish with 'in the time of King Henry', as Herbert served under that monarch.

The doorway is protected from the elements by a 14th-century porch.

Further along the south exterior wall is a 12th-century priest's door, giving access to the chancel. 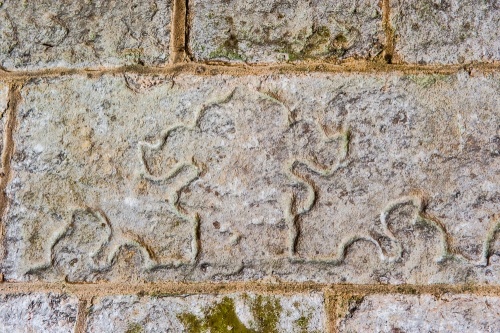 Section of a Norman cross slab in the wall

Within the church, there is excellent Victorian stained glass by the famous studio of Clayton and Bell, the same company responsible for the painted polyptych altarpiece. The tower screen is wrought iron, and the pulpit is painted iron. The chancel screen is brass and iron, created by T Potter & Son.

The chancel arch dates to the Norman period and is very plainly carved. On the wall to the south of the arch is a statue of St Andrew, erected in the Victorian period. The tower arch is also Norman and also very plain.

One of the most interesting historical features, however, is not in the church but outside the south porch, where you will find a worn 14th-century effigy set on a modern altar base. The effigy is thought to have been brought to Weaverthorpe from Nostell Priory when it was suppressed by Henry VIII in the Dissolution of the Monasteries.

St Andrew's is normally open daily to visitors. There is parking for cars in a pair of small laybys on the road in front of the church. 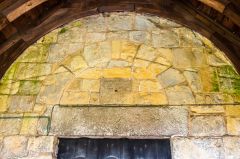 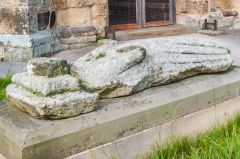 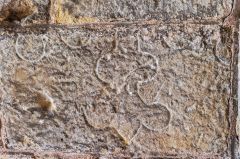