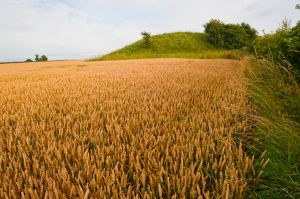 Duggleby Howe is a circular round barrow, one of the largest such monuments in England. Artefacts recovered during excavations of the Howe suggest that it was built in the late Neolithic period, but no definitive date has yet been determined. The base of the barrow measures 120 feet in diameter, rising to a level area some 47 feet across. The height is 22 feet at the east and it slopes down to 18 feet at the east.

The top may once have been higher, as it appears to have been levelled off at some point. In the medieval period, a post mill was erected on the top, and this may account for the levelling. The barrow lies within a large encircling ditch, though this can be difficult to spot unless you are fortunate enough to fly over the site!

The howe appears to have served as a burial place for several generations of inhabitants. At the base of the mound was found a male skeleton, buried with a bowl and flint flakes. Above this grave, a later burial was found of an adult with a child and the skull of a second adult. Later generations added further burials, including remains of 53 cremations.

The mound lies just off the road between Sledmere and Duggleby, at the southeastern edge of Duggleby village. Note that Duggleby Howe is not signposted, and there is no direct footpath to the site. However, if you follow the edge of the field boundary, avoiding stepping onto the farmer's crops, it will take you to the base of the Howe.

More self catering near Duggleby Howe >>