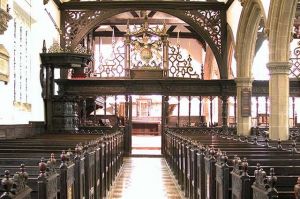 Leeds, St John the Evangelist
A rare Jacobean town church, built between 1632 and 1634, St John's is the oldest church still standing in central Leeds. It is rare to find any churches built during the immediate pre-Civil War era. The entire cost of the church was financed by John Harrison, a local wool merchant. Harrison was also responsible for founding almshouses and a grammar school in the area.

Harrison's wealth provided his new church with superb interior furnishings including an exquisitely carved and painted wooden screen. The decoration of the screen is exceptional and includes floral designs, human heads, hearts, animals, and grotesque likenesses.

There are further exceptional carving decorating the pews, pulpit, and wall panelling. The ceiling has lovely decorative plasterwork, and there are beautifully carved corbels depicting angels playing musical instruments, among other themes.

The stained glass is not original; much of it dates to the Victorian period. One window is commemorated to Harrison and shows him directing the construction of the church. The church is full of monuments to prominent local citizens. The church was sensitively restored in the 19th century by Norman Shaw.

St John the Evangelist is no longer in regular use and is now cared for by the Churches Conservation Trust.

More self catering near Leeds, St John the Evangelist >>

More bed and breakfasts near Leeds, St John the Evangelist >>