HERITAGE HIGHLIGHTS:   Housed in the former gatehouse to Kirkstall Abbey 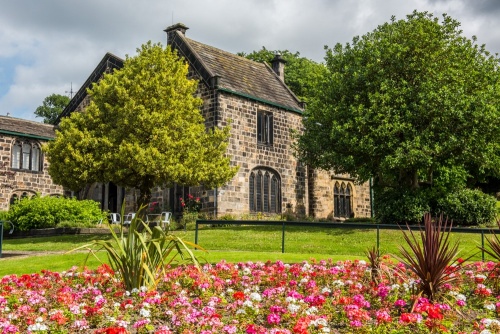 Abbey House Museum in Leeds was originally the inner gatehouse for Kirkstall Abbey, a 12th-century Cistercian monastery founded by monks from Fountains Abbey. The museum shows what life was like in Victorian Leeds, with beautifully-recreated street scenes. Step into a 19th-century house, shop, and pub, and see what life was like for 19th-century children in the Childhood Galleries.

Kirkstall Abbey was founded as a daughter house of Fountains Abbey in 1147. Twelve monks and an abbot from Fountains established an abbey at Barnoldswick, near Skipton. After 5 years at Barnoldswick the monks moved to a new site at Kirkstall, on the River Aire.

Kirkstall Abbey lasted until it was suppressed by Henry VIII in 1539. The gatehouse had its arched entrance passage blocked at both ends so that it could be transformed into a residence. 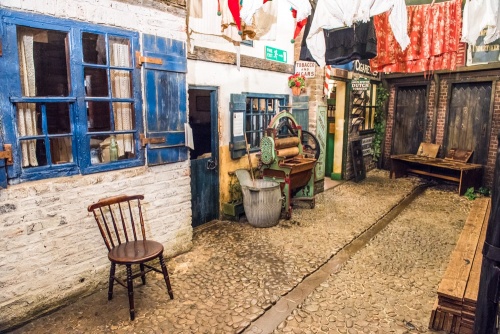 Over the next four centuries, it served as a farmhouse and as the home of the Butler family, who operated the nearby Kirkstall Forge. Abbey House was purchased by Leeds City Council in 1926. The Council opened the house to the public as a museum of bygones and folklore in 1927. In the 1950s three historical streets scenes were added to the museum.

The museum was refurbished and updated in 2001 with a dozen new street scenes, recreating life in Leeds around 1880. Visitors can now stroll along accurately recreated Victorian streets and step inside shops, pubs, and houses. 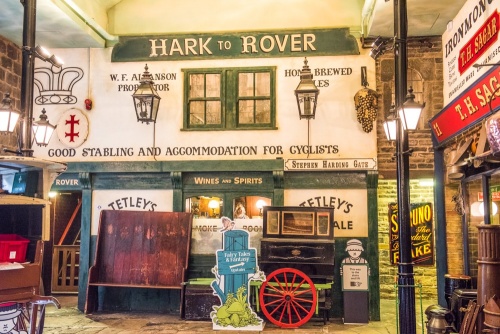 The 'Hark to Rover' pub

You can visit a recreation of Stephen Harding Gate, the Victorian version of a modern High Street, on step inside a Sunday School lesson. See what life was like for a 19th-century washerwoman in the backstreets of Leeds and pop into the Hark to Rover Inn, a traditional Victorian drinking house.

Explore life and death in Victorian times in the poor residential area of Abbey Fold, see how a well-to-do pawnbroker lived and then step inside the squalid home of a poor undertaker.

See a pottery shop, a perfumery, a grocers, and the workshop of a clay pipe maker. Step inside an ironmongers shop, a barbershop, and a Victorian schoolroom. Stroll the back streets, where washing is hung up to dry on lines spanning the cobbled street. 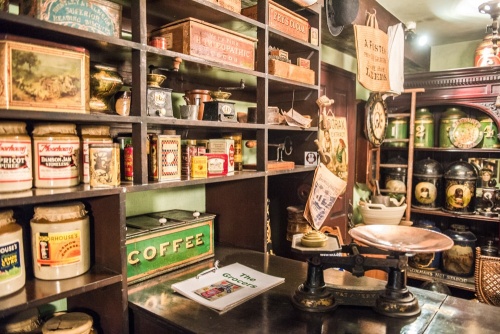 The Childhood Galleries take a trip down Memory Lane, with a glimpse into the life of a Victorian child. See old toys, games, and dolls. Try out vintage slot machines with an old fashioned penny from a vending machine.

One fascinating highlight in the Childhood Galleries is a 'deportment chair', a straight-backed wooden chair invented by Sir Astley Paston Cooper to train children to sit upright. To modern eyes, it looks like an instrument of torture but deportment chairs were widely used during the 19th century.

There is also an exhibition on Kirkstall Abbey, how it was built, its history, and the events surrounding its closure by Henry VIII's commissioners.

Abbey House Museum is both a historic house and a museum rolled into one. One feature is the De Lacy Room in the south wing. Initially used as a stable and hay loft, this room was a library by 1870 and a dining room by 1902. The De Lacy Room has a beautiful plasterwork ceiling installed by Colonel T Walter Harding, who lived here from 1890.

Inside the museum entrance is a replica of the 1666 Plague Stone from Chapel Allerton. The original is in the Leeds Museum. When the plague broke out, merchants were worried about coming into contact with infected plague victims. People coming from the surrounding area would place their goods for sale by the stone. Buyers would put coins in a hollow on the top of the stone which was filled with vinegar. Cleansing the coins with vinegar was thought to stop the spread of the disease. There is also a possibility that plague victims were buried beside the museum building. 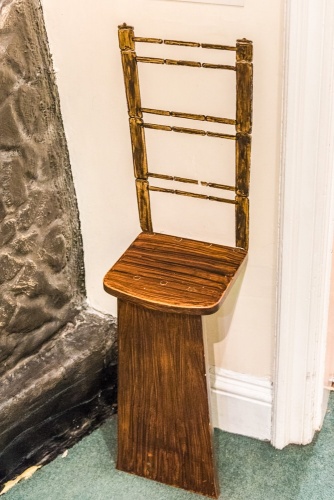 Abbey House Museum is directly opposite the ruins of Kirkstall Abbey on the A65. There is free on-site parking, but there is a charge to explore the museum. 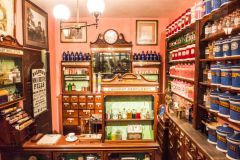 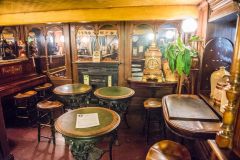 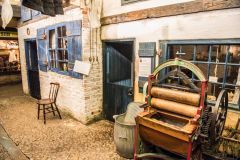