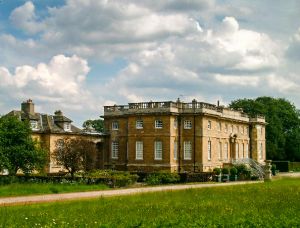 Bramham Park is a stately home built in 1698 by Robert Benson, the 1st Lord Bingley. It was Lord Bingley who was responsible for laying out the extensive landscape gardens around the house which make a visit to Bramham such a delight.

The gardens cover some 500 acres, divided by long avenues, and dotted with neo-classical follies in the style of Greek temples. The gardens epitomise the transition between the formality of 17th-century European gardens such as Versailles, and the informality of later English landscape gardens.

The garden was an extension of the house, a carefully designed landscape in the style popularised by the architect Andre Le Notre at Versailles. It has even been suggested that Le Notre had a hand in the garden's design.

At the rear of the house stands this classical temple, built in 1760 by James Paine. Four Ionic columns define a 3-bay front facade and give access to an inner chamber that spans the full width of the building. The name may be confusing; the building was intended as a folly in the style of a Palladian temple. It later served as an orangery, then a summerhouse, before it was consecrated as a chapel in 1907, a function it still serves.

Built in the early 18th century in limestone ashlar as a single cell with a 3-bay pedimented front facade. The temple is sometimes called the Lead Lads Temple after the lead statues that originally stood on the pediment. The statues were unfortunately stolen and never recovered.

This octagonal 18th-century temple is also built of limestone ashlar. It stands 2 storeys high with corner buttresses. The temple was converted into a water tower in 1907 to supply water to the house. It served to hold the water supply until after WWII.

This circular temple in Ionic style stands in the Black Fen pleasure ground. It dates to the mid-18th century and was probably designed by James Paine. From the Rotunda, six paths radiate out to other landscape features.

The house itself was built by an unknown architect in the style of a 16th-century Florentine villa. Robert Benson was heavily influenced by a grand tour of Italy he took in 1697 and he wanted a house to reflect the classical Italian architecture he had seen on his travels. The house is neither Palladian (too early) nor Baroque but falls somewhere in between.

The result is a central block linked to flanking wings by colonnades. One wing held the kitchen, the other housed the chapel, symbolically balancing the needs of body and spirit. The striking central hall rises 2 storeys through the central block, and still bears the marks of a devastating fire of 1828.

The house has remained in Benson family hands since it was built, but only by passing sideways on several occasions. One of the owners was George Lane-Fox, an P for Beverley knows as 'The Gambler' for his profligate lifestyle. The house suffered a serious fire in 1828 and stood derelict and empty for 80 years until it was restored in 1908 by another George Lane-Fox, grandson of the first.

A subsequent owner was yet another George Lane Fox, who established the Bramham Horse Trials in 1974. In addition to the prestigious horse trials, Bramham is home to the annual Leeds Festival.

The gardens are regularly open to visitors, but both the house and garden are open by appointment at most times of the year. 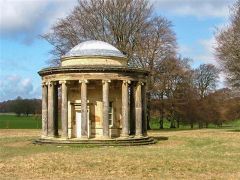 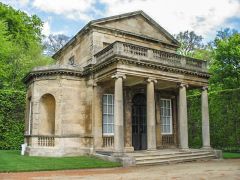 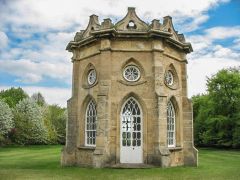 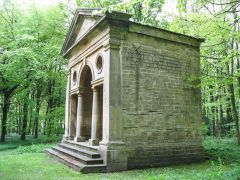 More self catering near Bramham Park >>