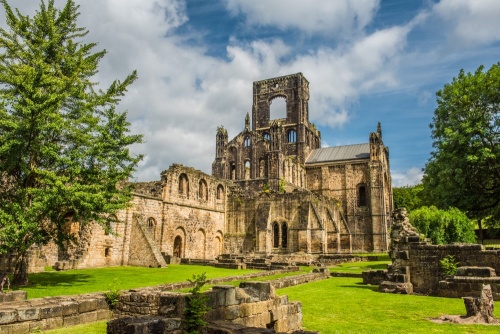 Kirkstall Abbey is a remarkably complete medieval monastery set in parkland beside the River Aire, yet very close to the centre of Leeds. Kirkstall is one of the best-preserved Cistercian abbeys in England.

The tale of Kirkstall Abbey begins in the middle of the 12th century when Henry de Lacy, the powerful lord of Pontefract, fell seriously ill. He vowed that if he recovered he would found a monastery in gratitude. He did indeed recover, and kept his promise, giving land at Barnoldswick, near Skipton, to Fountains Abbey.

In 1147 a group of twelve monks under Prior Alexander left Fountains Abbey to found a daughter house at Barnoldswick. The Cistercians valued solitude, and built their monasteries as far from the distractions of everyday life as possible. 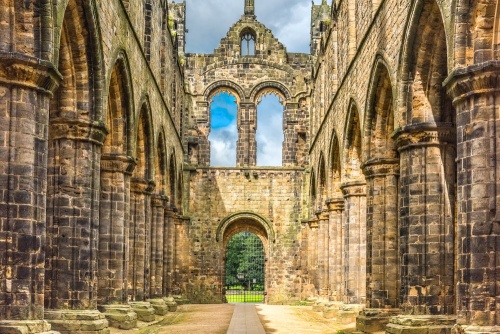 Abbot Alexander, to his dismay, discovered that there was already a community at Barnoldswick, and a parish church. He seems to have acted like a petty tyrant, for he tore down the parish church, an act that, not surprisingly, provoked anger and outrage amongst the inhabitants.

They took the abbey to court, but the Pope intervened, ruling that Abbot Alexander had acted piously, allowing a church to fall but an abbey to rise. The case was decided in the monk's favour, but the residents must have been seething.

Over the next few years the Barnoldswick site was inundated by heavy rains, which ruined the harvest. But relief was at hand, for when Abbot Alexander was away on abbey business he passed through a pleasant, wooded site by the River Aire, inhabited only by a few hermits. The land was owned by Henry de Lacy but held of him by William Peitevin. The hermits were bought off by De Lacy, and Peitevin gave his assent, so in 1152 the monks moved from Barnoldswick to Kirkstall. 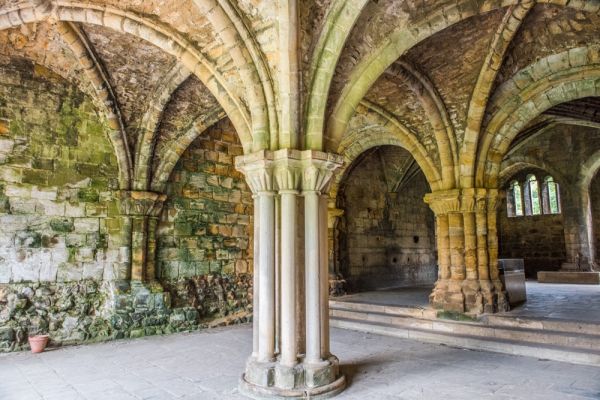 Interestingly the abbey's seal incorporates the Peitivin family coat of arms rather than the crest of their patron, Henry de Lacy.

The monastic buildings were finished by the time Abbot Alexander died in 1182. They were initially built of timber but almost immediately replaced with locally quarried Bramley Fall gritstone. The monks grew wealthy from the wool trade, and also built two mills and a forge.

The early history of the abbey was recorded by Hugh of Kirkstall, who became a monk here in 1183. A copy of Hugh's history is now in the Bodleian Library in Oxford. Later additions to Hugh's account tell how the abbey experienced financial problems in the 13th and 14th centuries, despite receiving royal grants of protection. 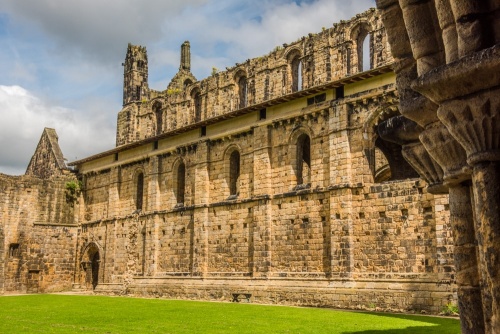 The abbey survived until 1539 when Abbot John Ripley surrendered to Henry VII's commissioners.

What happened next was rather unusual; local inhabitants did not start robbing stone from the abbey for other building projects. They seem to have used the monastic buildings for storing grain and housing livestock, essentially transforming the abbey into a cluster of farm buildings. Perhaps it was because of this that the abbey survives so well today; the abbey church still stands to its full height in places.

By the 18th century Kirkstall Abbey was a romantic ruin, visited by artists. In the 1890s the City of Leeds bought the site and laid out the abbey grounds as a public park. 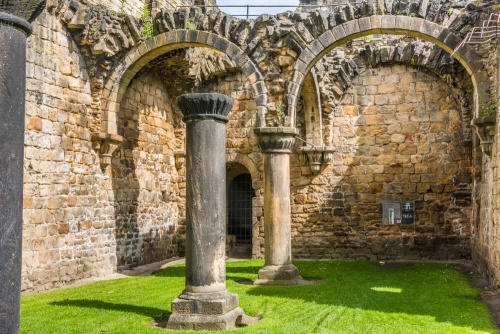 Around the monk's cloister are the scriptorium (where books were laboriously copied by hand), the library, chapter house, parlour, dormitory, warming house, lavatorium, refectory, kitchens and malthouse.

West of the monastic church is the bakehouse, the lay brothers' infirmary and the guest house. The guest house was built between the 13th and 15th centuries in the form of a medieval manor house with an aisled hall, a central hearth, and a two-storey chamber for housing important visitors. One of the best-preserved parts of the site is the 13th-century Abbot's Lodging. 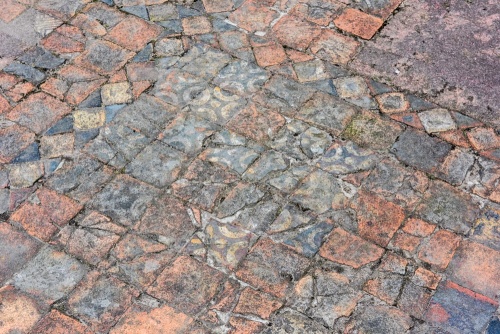 You can see medieval floor tiles in several places around the abbey, including in the refectory (the dining room).

The most impressive thing about Kirkstall Abbey is how high the walls are; I can't bring to mind any monastic site in Britain where the medieval walls survive so well, in many cases, they still stand to roof height.

Across the road from Kirkstall Abbey is the Abbey House Museum, housed in the former abbey gatehouse. The museum gives a glimpse into life in Leeds during the Victorian period. You can wander through recreated Victorian streets and step into pubs, houses and shops. The Childhood Galleries show what life was like for 19th-century children, with period toys, games and dolls.

The abbey is off Abbey Road and the A65, opposite Abbey House Museum. There is free onsite parking and entrance is free. 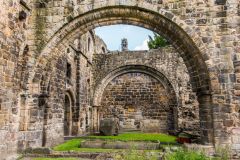 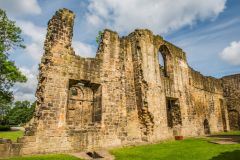 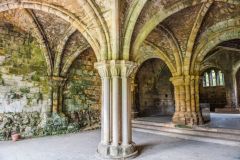 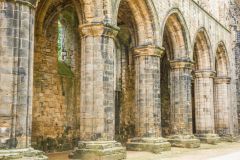 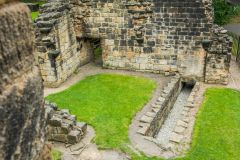 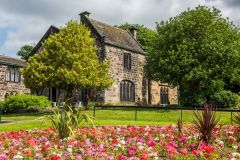 More self catering near Kirkstall Abbey