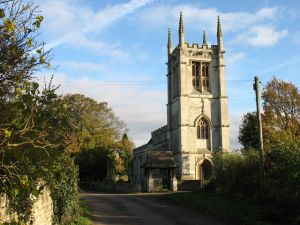 Aldwincle, All Saints Church
An intriguing church dating to the 12th century, containing a late 15th-century chantry chapel and a beautifully proportioned west tower. The chantry chapel was founded by the Chambre family in 1489 and contains very nice Perpendicular carving.

The church was originally aisleless, but the north aisle was added around 1190 and the south in about 1350. The church was expanded in the early 14th century when the porch, spire and clerestories were added.

The most interesting feature of the exterior is the collection of carvings found at the string course. Here you will find a diverse and wonderful collection of carved birds, beasts, and downright peculiar beings.

There are human figures that may be churchmen and others that may be knights. Other carvings in the body of the church look like Green Men, the pagan wild man of the woods, surrounded by foliage.

The interior is sparsely furnished, allowing the beauty of the medieval structure to shine through. The nave arches and arcading is particularly lovely. The south arcade may date to as early as the late 12th century.

The font is Early English, probably 13th century. There are fragments of 14th-century glass in the chancel. beside the altar is one of the oldest memorials in the church, to Margaret Davenant (d. 1613).

In the churchyard is a Grade-II listed cross shaft.

All Saints is of particular interest for its association with the poet John Dryden (1631-1700). Dryden was born in the rectory (now a private home) opposite the church. He was baptised in All Saints and lived in the village for many years.

More self catering near Aldwincle, All Saints Church >>

More bed and breakfasts near Aldwincle, All Saints Church >>