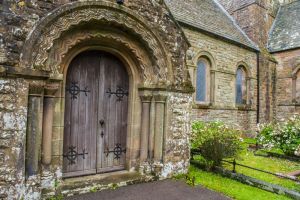 There was very likely a wooden church at Bridekirk before the Conquest. Around 1130 this was replaced a sturdy Norman church in stone. This, in turn, was replaced by the current building in 1868, which stands beside the ruins of the Norman church.

The new neo-Norman church incorporates the south doorway arch and tympanum from the 12th-century church, as well as the chancel arch (now placed over the organ) and a south transept doorway.

Within the Victorian church are two superb relics of the Saxon period. One is a spiral cross-head, probably of 10th-century origin.

The second item of early origin is an utterly superb rectangular font, which must rank as one of the best late Saxon or early Norman fonts in the country. There is some debate about the age of the Bridekirk font; some estimates place it in the 12th century, others as early as the 10th century or even earlier. It is thought to have been found at Papcastle and brought to Bridekirk at some point in the past.

The carving is truly magnificent, but it is a Runic inscription on one side that has historians and linguists puzzled. This reads something like 'Er Ekard han men egrocten. and to dis men red wer Taner men brogton' and has been variously interpreted as meaning 'Here Ekard was converted, and to this man's example were the Danes brought.' or 'Richard he me wrought, and to this beauty me brought'. Hmm... well, that's clear, then!

But however puzzling the inscription, there can be no doubting the wonderful clarity of the carving. The font is divided into two roughly equal sections, tapering slightly outwards towards the top.

There is so much detail on the font that it is hard to cover it all, but here are a few highlights; above the inscription is an image of a man eating grapes. Beneath this is a sculptor with a chisel. There are numerous bizarre and grotesque beasts, a floriated cross, foliage, and a scene of the baptism of Christ by John the Baptist. On the north side is an image traditionally thought to represent an angel driving Adam and Eve from Eden.

This truly is a magnificent piece of Anglo-Danish art, and well worth a trip to see.

St Bridget's makes an effort to remain open to visitors during daylight hours. Unfortunately, it can sometimes be closed, so be aware that you may need to make special arrangements to view the interior.

The first time we visited there was a very welcoming sign on the Norman doorway telling us the church was open to view. We quickly discovered, though, that all the doors were locked. I can only assume that was a one-off; perhaps someone delegated to open the doors was delayed for some reason that day. 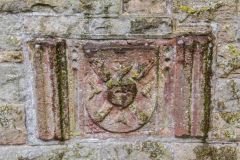 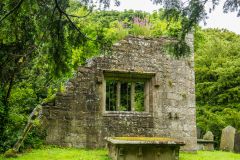