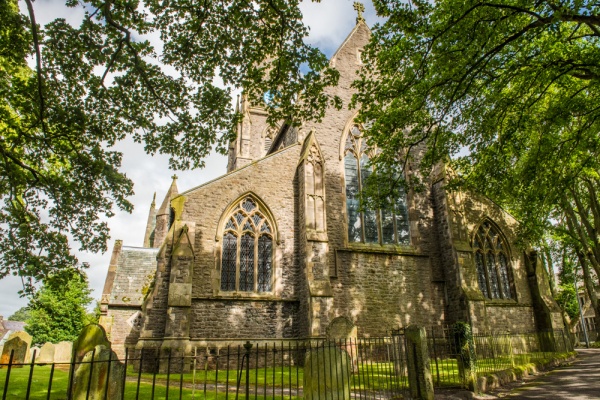 Standing atop a wooded hill overlooking the heart of historic Cockermouth is All Saints Church. The present church dates to 1854 but is probably the third church on the site.

The first building that we know of was erected in the 14th century, but may have been built on the remains of a still earlier 11th-century building founded by Waltheof of Allerdale.

In 1395 Henry Percy endowed a new church, said to be the best example of Gothic style in the north of England.

By the 18th century, the medieval building was in such poor condition that it had to be pulled down rather than rebuilt, and a new church was erected in 1771.

The 18th-century church was destroyed by fire in 1850, and the present building erected in its place 4 years later. The church is in keeping with its medieval heritage, and is an excellent example of Early English style. The striking spire reaches 180 feet high and can be seen from surrounding villages. In the tower is a clock and chimes designed by John Blaylock of Carlisle. 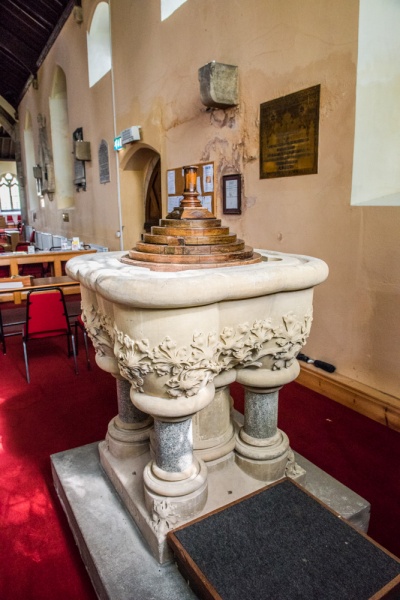 One of the finest features is the pulpit, made of Caen stone, and the church retains the original 1854 Bible and Prayer Book used in its dedication ceremony. Another highlight to look for are the beautifully carved nave capitals.

The font is Early English in style, with detached marble shafts. It was probably the work of Joseph Clarke, who oversaw the church design and created the pulpit. Clarke was a London architect specialising in ecclesiastical work. He served as diocesan supervisor for Canterbury, Rochester, and St Albans and was a consultant architect to the Charity Commissioners.

The Victorian stained glass is exceptional. The west window was designed by the famous 19th-century artist CE Kempe. The most interesting glass is in the large east window, designed by John Hardman and dedicated to poet William Wordsworth and his sister Dorothy, both of whom were born in Cockermouth and worshipped in the previous church. Both of the Wordsworths were baptised in All Saints.

Their father John Wordsworth is buried in the churchyard. Also in the churchyard is the grave of the Astronomer Royal, Fearon Fallows (1788-1831). Fallows was a native of Cockermouth but died in Simon's Town, South Africa.

There are also four very good stained glass windows in the south wall to Rev. Eldred Green, who served as vicar from 1874-1881. 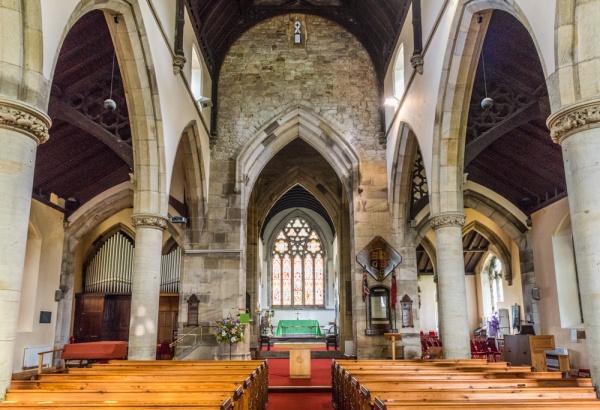 Looking towards the altar and the Wordsworth memorial window

Several memorials survive from the earlier churches on this spot. One such is a simple stone tablet to Henry Barker (d. 1785) and his wife Ann (d. 1794). Compare the Barker tablet to the ornately carved wall monument to Henry Bell, who died in 1876. The epitaph recors that the monument was erected "by many friends in token of the esteem felt for him throughout his life, his ready help, his affectionate kindness, and warm sympathy endeared him to all."

One fascinating feature is a painted dedication board dated 1840, thanking the Earl of Lonsdale for giving 100 pounds per year to appoint an assistant curate. The dedication suggests that the people of Cockermouth had the board painted "with a hope that the Record may dispose others to like Pious Consideration to the spiritual wants of their Brethren", In other words, "the Earl gave money to the church, now its your turn".

All Saints church is very easy to reach from Market Place. It is usually open to visitors during daylight hours and was open when we visited. 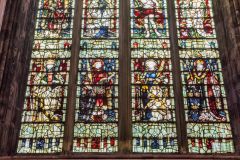 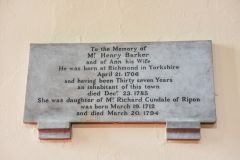 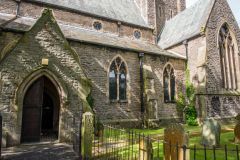 More self catering near Cockermouth, All Saints Church

More bed and breakfasts near Cockermouth, All Saints Church

Self Catering near Cockermouth