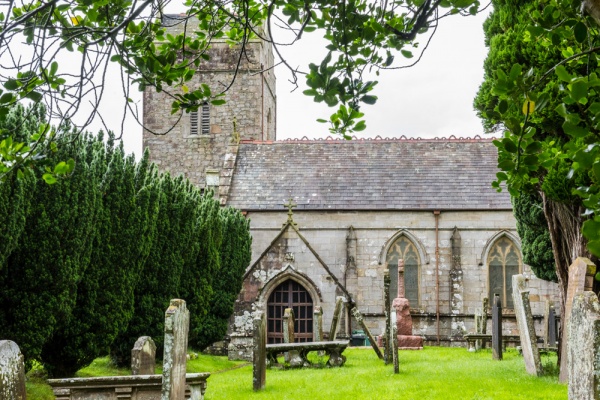 Between Cockermouth and Workington stands the hamlet of Brigham. On the northern edge of the village stands the 11th-century parish church, dedicated to St Bridget. The church stands on a site thought to have been used for worship as early as the 6th century AD and may have formed part of an early nunnery.

St Bridget's was once a minster, or mother church, for a huge area of northern Cumbria, including the nearby town of Cockermouth.

The medieval church was completely restored by William Butterworth from 1864-1876. Butterworth was perhaps the most famous architect of the late Victorian period, and specialised in church architecture. He was known for his richly decorated interiors and 'High Church' style. In Brigham Butterworth created a wonderfully ornate interior design of colourful patterns. The ceiling is painted in exuberant colour, with geometric designs, flowers, and stars. 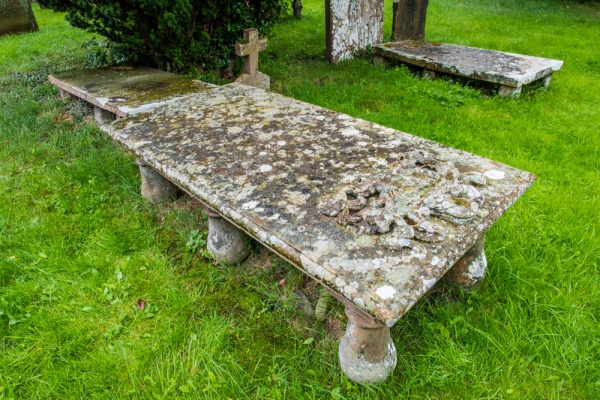 Butterfield was also responsible for the saddleback roof of the 13th-century west tower.

In the south aisle is a tomb niche for a former rector, Thomas de Burgh, who served as Treasurer of Ireland. De Burgh died in 1337.

In the south aisle chantry chapel is a collection of Anglo-Saxon and Viking carved stones, including fragments of crosses. One piece of a cross head depicts an unusual human face with curly hair. 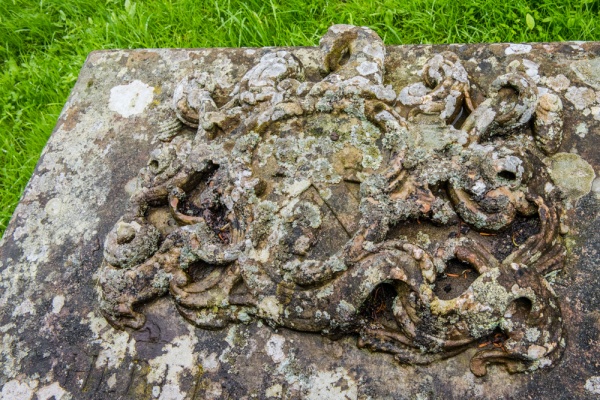 Coat of arms on the Christian tomb

George Fox, the founder of Quakerism, visited Brigham church on two occasions during the Civil War period. On one of those visits, he converted the vicar of St Bridgets to Quakerism - in his own church.

St Bridget's churchyard is a treasure trove; there are over 700 gravestones and memorials. Among the gravestones are those to local vicars, surgeons, schoolmasters, farmers, weavers, and the very first guard on the railway between Workington and Cockermouth. There are several memorials to miners who were tragically killed in pit explosions.

Perhaps the most interesting memorial is a table tomb to Charles Christian, the father of Fletcher Christian, leader of the mutineers who took over the HMS Bounty and cast Captain William Bligh adrift in a lifeboat. Fletcher Christian was born at Eaglesfield in 1764. He was not baptised in Brigham church, rather, the vicar of Brigham baptised him at home on the day of his birth, for he was such a sickly child that it seemed he would not survive.

There are three bells in the tower. The treble and tenor bells date to 1711 but the middle bell is made of brass and dates to about AD 1320, making it one of the oldest bells in England. It is listed by Churchcare of the Church of England as a bell of historical importance.

In the churchyard is the grave of Joseph Wilson, who served as the local hangman. The job must have become too much for him; Wilson became depressed and committed suicide in 1757 by jumping off Cocker Bridge. His gravestone originally had a carving of a hangman's noose on it (though the noose has since disappeared).

One night a farmer was riding past the churchyard when a spectre of a hanged man appeared beside him, a noose around its neck. The hangman's ghost was said to haunt the churchyard until 1860, when the sexton dug up Wilson's skeleton and took his skull to his former home in a nearby cottage. From that time on the ghostly hangman was never seen again. 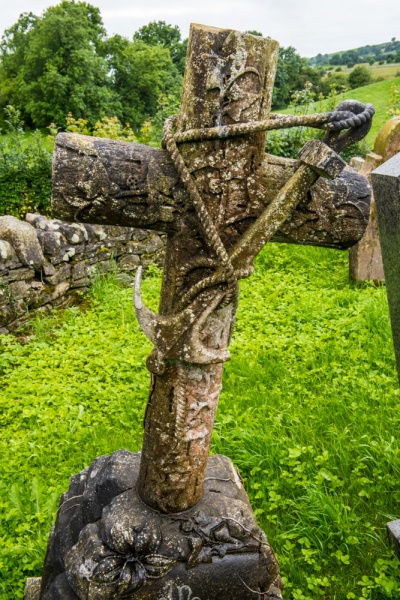 Gravestone of a sailor

St Bridgets is very easy to find. It is immediately off the A66 just west of Cockermouth. Just take the first turning for Brigham and you will find a small parking area just below the churchyard. The Christian family tomb is just east of the churchyard path, near the south porch.