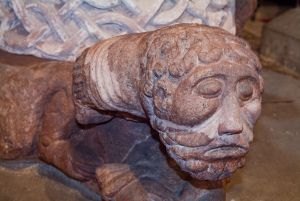 The remarkable Castle From font

The parish church of St Michael in the little Herefordshire village of Castle Frome is an early 12th-century building. It was very probably founded by the de Lacy family, Norman nobility who owned large estates in this area of Herefordshire, and whose name lives on in nearby locations like Hampton Lacy.

Several original Norman features remain, including a trio of Norman doorways, each with a tympanum. There is also evidence of a Norman sundial over the south door. But the most interesting historic feature, and the one that draws visitors from around Britain to this delightful country church, is a fabulous carved font, crafted in about 1170.

The font is thought to be the work of the Herefordshire School of carvers, who were responsible for many of the fabulous carvings in the county, such as those at Shobdon and Kilpeck.

The font is roughly chalice-shaped, tapering outwards towards the top. It stands upon four crouching human figures. One interpretation of this unusual structure is that it was meant to portray the triumph of baptism over the forces of evil.

Though the figures at the base of the font do catch your eye, it is the extraordinary carving on the font itself that will take your breath away. This is truly exceptional, on a par with the carved font at Bridekirk in Cumbria. Among the images carved on the body of the font are a winged bull, a pair of birds, a beast like a lion, a fish, and an angel. These figures are surrounded top and bottom by layers of interwoven geometric patterns. The overall effect is quite astonishing.

There is more in St Michael's than just the font, however. In the chancel is a rounded recess which may have held a heart burial. This suggestion is given some support by the figure in the window above the recess of an armed man holding a heart in his hands.

Heart burials were not uncommon in the early medieval period, especially for crusading knights who died overseas, as it was far easier to bring back a casket with the deceased's heart rather than to transport the entire body back to England.

Set against the north wall of the chancel is an extremely fine tomb bearing effigies to William Unett and his wife Margery. The Unett tomb is early 17th century, and the effigies are beautifully carved, showing in great detail the fine points of costume at that time. The effigies were originally richly painted, and traces of vividly coloured paint still cling in places, giving a tantalizing glimpse into what they must have looked like when new.

Other items of note include the 15th-century nave roof with carved bosses, a 17th-century pulpit, and a 14th-century east window. Fragments of 15th century stained glass still remain in the south window in the nave.

To the north of the churchyard, a green lane (a sunken roadway) leads to the site of a Norman motte. 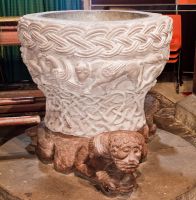