HERITAGE HIGHLIGHTS:   Superb 16th century Harford memorials are among the finest in England 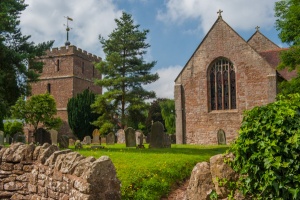 The words 'an absolute delight' spring to mind when I consider Holy Trinity church in Bosbury. There is honestly so much of historic interest here that it is hard to know where to begin. Bosbury was an important place in the medieval period; the powerful Bishops of Hereford maintained a 'palace' in the parish (really a grand manor house) and two Bishops died at Bosbury; Athelstan in 1056 and Richard de Swinfield in 1316.

In the late 13th century the palace was rebuilt, on the site now occupied by Old Court Farm. The 13th-century gateway to the palace still stands, incorporated in later hop kilns.

To further emphasise just how important Bosbury was, the Knights Templar had a preceptory here, at what is now Temple Court. Many of the cottages that line the lanes near the church are attractive timber-framed buildings from the late medieval or Jacobean period.

That same sense of prosperity extends to Holy Trinity church, which is large and imposing. The first written record of a church at Bosbury comes from 1200, during the reign of King John, when a royal charter named a priest to be appointed, with all the powers 'of his predecessors', suggesting that there was a church here long before King John. Much of the current building probably dates to the time of Bishop William de Vere (1186-1200). 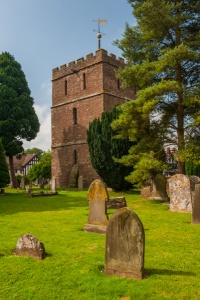 The most obvious feature of the church is the large detached bell tower in the churchyard. Looking more like a castle tower that has wandered away from its fortress than a bell tower, this sturdy structure dates from 1230-1240, slightly later than the body of the church, and is in Early English style.

The defensive appearance is underlined by the fact that all the windows are narrow lancets, suggesting that it was intended as a refuge for parishioners in times of trouble; Herefordshire's proximity to the Welsh border meant that there was always the threat of armed raiders in the area. Detached towers are not as unusual in Herefordshire as they are in the rest of England; there are 7 detached towers elsewhere in the county, though none as solidly built as Bosbury's. 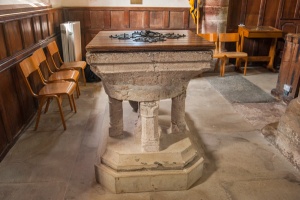 The main body of the church dates from about 1200 AD, and shows both Norman and Early English features. The south doorway is carved with Norman scalloped capitals on both sides, and the nave capitals are in the same style. The arcade arches, however, are Early English, showing the transition in style from round-headed Romanesque to pointed Gothic.

The nave roof is ancient, perhaps as old as the 13th century. The font is 12th century, raised on 5 legs, with a square bowl and lead-lined basin, a rare survivor (there is another lead-lined Norman font at nearby Thornbury).

There is also a very worn stone bowl thought to be the font of an even earlier Saxon church on the site. The older font was found under the floor at the west end of the nave during repairs in 1844. Beside the Saxon font is the original 13th century wooden door of bell tower.

The wooden screen dates to the late 15th century and unusually features fan vaulting on both the chancel and nave sides. There is a beautifully carved Jacobean pulpit, possibly Flemish in origin, displaying scenes from the New Testament, with an exquisitely carved panel depicting the Crucifixion. 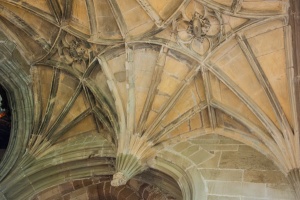 The south aisle terminates in the Morton Chapel, built in 1528 by Thomas Morton, Archdeacon of Hereford and nephew of Cardinal Morton. Thomas and his brother Rowland leased the Bishop's manor house at Bosbury after the Bishops ceased to occupy the manor themselves in 1503. The brothers built the chapel in memory of Sir Rowland's wife so that masses could be said for her soul in perpetuity.

Thomas Morton had been responsible for building Bishop Stanbury's Chapel at Herefordshire Cathedral, and his uncle Cardinal Morton had built the great central tower (Bell Harry) of Canterbury Cathedral, and the Morton Chapel bears great resemblance to both of those grand structures. The architecture is a superb example of late Perpendicular style, with extravagant bosses and fan vaulting lit by large Perpendicular windows.

One of the bosses shows a rebus, or visual pun on the name 'Morton'; the letter 'M' on a barrel, or tun. So how did the chantry escape the ravages of the Reformation? In 1540 Sir Rowland Morton was allowed to divert the chantry funds to found a grammar school for boys. The Morton school building still stands in the north east corner of the large churchyard.

The chapel windows once boasted fine stained glass, but much of the glass was destroyed by Parliamentary troops in the Civil War. Local tradition says that they wanted to destroy the medieval preaching cross in the churchyard, but gave in to the vicar's pleas.

They did, however, carve the inscription 'Honor not the X' on the cross face and 'Honor God for Christ' on the reverse. A replica of the cross head is on display inside the church, neat the Saxon font bowl. 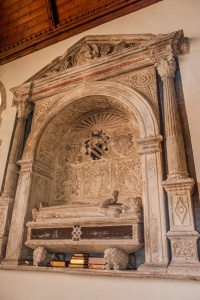 The Morton Chapel is simply superb, but it pales almost into insignificance as you pass from the chapel into the chancel, which is completely dominated - one might say overwhelmed - by two huge and ornate memorials to members of the Harford family. John Harford (d. 1559) and his son Richard (d. 1578) both served as stewards of the Bishop's manor at Bosbury, and the importance of the post is reflected in their magnificent tombs, facing each other across the altar.

John Harford's memorial is easily the more impressive of the two, and takes up almost the entire south wall of the sanctuary. The sculpture is attributed to John Guldo (aka Gildon or Guldon) and shows Italian influences. The attribution is based on an inscription on the column heads that reads 'JOHN GULDO of Hereford made this tombe w. his owne hande Ano. Dn. 1573.' 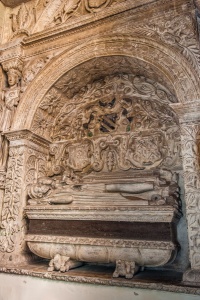 The elder Harford is shown lying atop a sarcophagus, between two Corinthian columns supporting a pediment. The entire composition is supported on a pair of lion figures. In any other context the younger Harford tomb would be considered overwhelming, but here it simply serves to emphasize the grandeur of his father's memorial.

Richard Harford is shown with his wife on a sarcophagus supported by a pair of monsters, with Adam and Eve supporting a pediment above their heads. How did stewards amass the wealth to produce such fantastic monuments? The written record rather intriguingly says that they 'enriched themselves in dealing with the church property', which suggests a certain 'eye for the main chance'.

There is some disagreement among experts over whether the same sculptor was responsible for both tombs - and even more disagreement as to their quality; one author calls them 'among the most fantastic tombs in England', while Pevsner rather grumpily describes the older tomb as 'executed with some homely touches'. Frankly, that's hair-splitting; the Harford memorials are superb.

There are other monuments in Holy Trinity, though it is hard to tear yourself away from the Harford monuments to investigate them! In the south arcade are a pair of grave slabs to Templar knights. On the south wall of the nave is a very worn gravestone thought to be that of Bishop Swinfield's father, discovered in 1776 behind a pillar in the south aisle.

The Latin text, now difficult to read, translates as 'Here lies Stephen the late Father of the Venerable Father, Lord Richard de Swinfield, by the Grace of God, Bishop of Hereford, A.D. 1282. 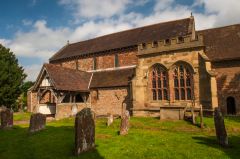 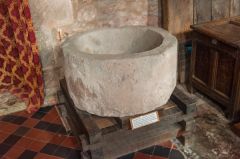 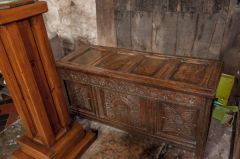 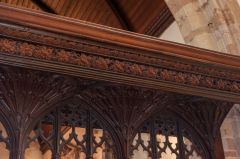 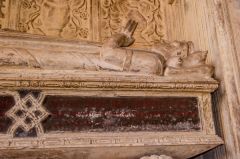 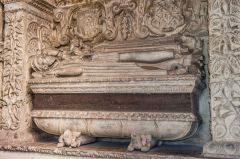 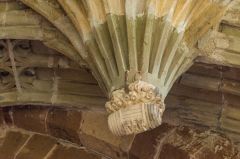 About bosbury
Address: B4220, Bosbury, Herefordshire, England, HR8 1QT
Attraction Type: Historic Church
Location: On the B4220 in the centre of the village. Easy on street parking nearby.
Website: bosbury
Location map
OS: SO695435
Photo Credit: David Ross and Britain Express

More self catering near bosbury

More bed and breakfasts near bosbury