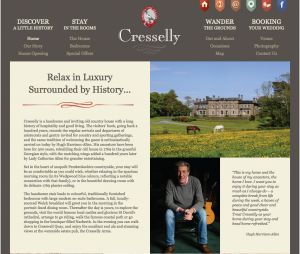 The history of Cresselly House dates back to a least the 16th century. The Bartlett family owned the estate from 1564, then passed by marriage to the Allen family when John Allen of Goodhooke married Joan Bartlett of Cresselly. The Allens learned that large deposits of coal lay buried on the Cresselly estate, and exploited that mineral wealth, exporting the coal from Cresswell Quay.

John Allen's son, Captain John Allen, decided that the earlier Cresselly House stood too close to the mine workings so he had the new house begun in 1769, higher up the slope of a hill. Allen descendants married into the famous pottery-manufacturing Wedgwood family of Staffordshire.

One Wedgwood relation, Thomas, came here with the poet Samuel Coleridge, who later wrote that life at Cresselly featured 'plenty of music and plenty of cream'. The estate is still in the hands of the Allen family.

Perhaps the most interesting feature of the house interior is a central staircase designed by William Hoare in 1817. Another highlight is the Drawing Room, decorated in Italian style. The walls are lined with hunting trophies and family portraits and the rooms abound in antique furniture.

The house is open for guided tours several weeks each year, usually in the summer months. Please see the official website for this year's open days. Group tours can be pre-arranged at other times.

More self catering near Cresselly House >>