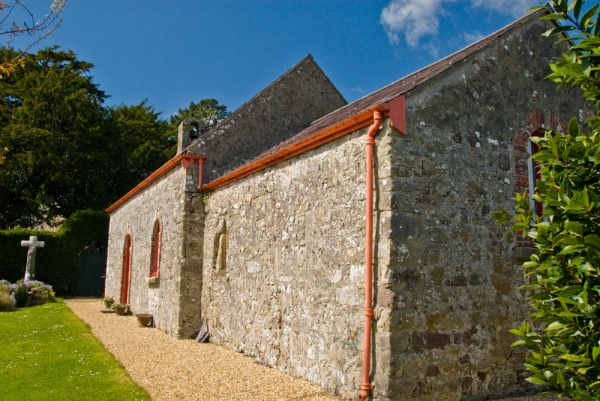 In the grounds of Upton Castle stands a fascinating Grade I listed 12th-century chapel that predates the castle by at least a century. Though the chapel we see today may have been built in the early 12th century it stands on the site of an earlier Celtic Christian site of worship. The riverside site was important strategically long before the Norman incursion into south Wales in the late 11th and early 12th centuries.

The chapel is traditionally linked to the parish of Nash; as late as 1722 it was described as a chapel of ease to Nash. For centuries the lord of Upton Castle was the patron of Nash and until the Reformation, the rector of Nash lived at Upton Castle as a member of the lord's household. 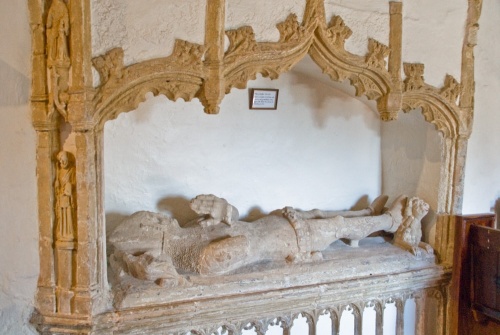 The chapel dedicated to St Giles, the patron saint of cripples and beggars, and holds a fascinating array of medieval memorials including several to members of the Malefant family who may have built the castle. The building we see today was subject to an 18th-century restoration of the door and windows and a more comprehensive 20th-century interior restoration.

Opposite the chapel entrance is an ornately decorated tomb niche containing an effigy thought to be that of Sir William Malefant, who died in 1362. Sir William is shown dressed in a suit of chain mail. The effigy is quite similar to the effigy of Edward, the Black Prince at Canterbury Cathedral. Edward died in 1376, so it is entirely possible that the same sculptor was responsible for both effigies.

Against the south wall of the chancel is a 13th-century partial effigy of a gigantic man, thought to be a Lord of Upton. Though the lower section of the effigy has been lost, what remains is six feet long. If it is a realistic representation then the unknown lord was an exceptionally tall man. Tradition says that the unnamed lord was returning from a long voyage when he was shipwrecked and killed within sight of home. The effigy is thought to be one of the oldest in Britain and was brought here from Nash church.

Also in the chancel is the effigy of a woman thought to be Lady Margaret Malefant, the wife of Sir William whose tomb stands in the nave. On stylistic grounds, the effigy may date to anywhere between 1380 and 1420, which is at odds with the tradition that Lady Margaret died in the same year (1362) as her husband. 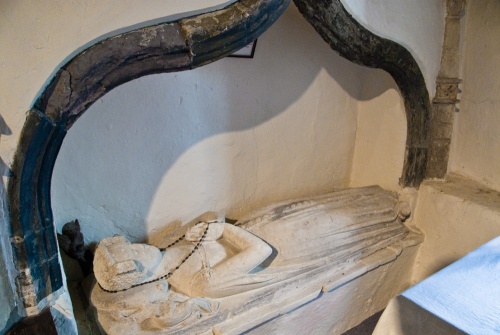 One of the most remarkable episodes in the long history of Upton Castle relates to a later Lady Margaret Malefant. According to the Parliamentary Rolls (a record of proceedings brought before Parliament) Lady Malefant alleged that on Whit Monday 1437 she was kidnapped by one of her husband's trusted servants.

According to the documents, Lady Malefant claimed that Lewis Leyson came to her at Upton Castle with a letter from her husband in which her husband said that certain enemies lay in wait for her and advised her to flee to her mother in London for her own safety. Lady Margaret was, quite naturally, frightened by this and agreed to accompany Leyson. What she did not know was that her husband was by that time dead and the letter was a forgery.

On the road towards London they were ambushed by armed men with swords drawn who 'smoten her upon her arms and yet beaten her servauntes'. They led her to Tythegston in Glamorgan, and brought her before Gilbert Turberville, who kept her prisoner 'in a chamber within a strong tower' for two days, threatening her with dire punishment unless she agreed to marry Lewis Leyson. She withstood the threats for two days before she was allowed to continue her journey to London.

One very unusual feature is a stone candelabra in the nave carved in the form of a clenched fist emerging from the wall. On top of the fist is a depression used to hold a taper or candle.

On the north side of the chancel is a very worn effigy of a churchman, recognisable by his tonsured head and floriated cross. The inscription is sadly too damaged to read so we don't know who he was. another medieval highlight is a Norman font, a simple square bowl set upon a broad, squat cylindrical stem.

On the walls are tablets commemorating members of the Tasker, Evans, and Bowen families, owners of Upton Castle after the Malefant line died out. Look for the tablet commemorating John Tasker of Bombay (d. 1800) sculpted by William Williams of St Florence. 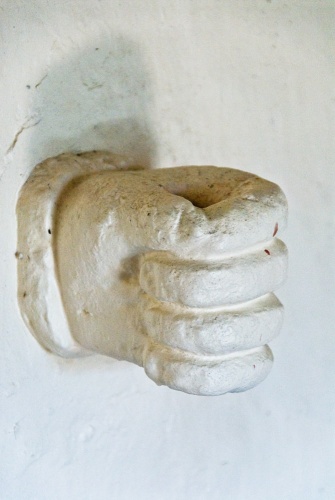 We came upon the chapel by accident. We were visiting Upton Castle to see the 35-acre gardens that surround the castle when we saw signs for the chapel. Naturally, we had to investigate and I'm so glad that we did. The Malefant effigies and the pervasive sense of history makes the chapel a delight to explore.

Please note that the chapel is not a public place of worship but a private chapel. As such it is only open to the public during garden open times (usually Easter through September but please check for updated times with the official website). 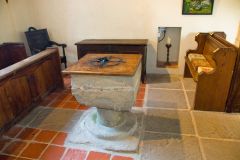 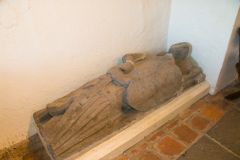 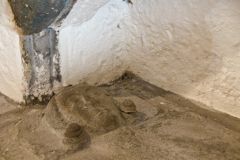 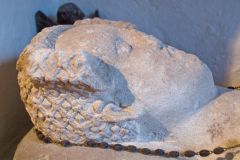 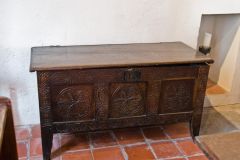