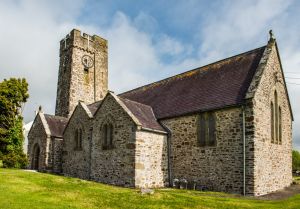 A 12th century church once belonging to the priory of Pembroke, later granted to the canons of St David's Cathedral. In the porch is an 8th century pillar cross.

As for the 8th-century carved stone, it is 1m long and 25cm wide, with an incised carving of a cross within a circle. This type of carving is known as a ring cross, and though the most common date given to the stone is 8th-9th century, it may have been carved as early as 600 AD. It was discovered set into the porch floor in 1915 and put in a safer position against the east wall of the porch. The archway in the porch may be 12th century, and there is an early medieval squint. 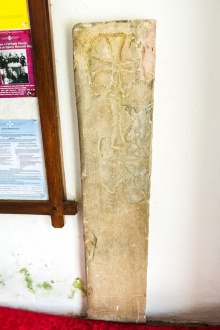 We know that there was a church here in 1291, for it occurs in taxation rolls as Ecclesia de Villa Galfri, and belonged at that time to Pembroke Priory. In the early 14th century it was transferred to St Davids. Sometime in the late medieval period a west tower was added.

The church was in almost derelict condition by the mid-Victorian period, and was almost completely rebuilt in 1868. Only the tower and some sections of the medieval walls could be preserved; the rest had to be torn down for safety's sake and rebuilt. The tower base and the porch retained their medieval vaulted roofs, but the remainder has 19th-century roof timbers.

The font is one of the few parts of the church to survive the Victorian rebuilding. It consis of a square, 12th-century bowl with scalloped underside, set on a round pillar.

Most of the interior memorials are to the Allen family, including a white marble monument to Gertrude Allen (d 1825) by William Williams.

In the nave is a striking memorial plaque to William and Penelope Keates in the form of a draped urn. The memorial tellls us that William served as the Deputy Inspector General of Hospitals in Dacca, Bengal, India. Penelope was the third daughter of Hugh Wilson of Creswell, Pembrokeshire. Both the Keates died in India, she in Dacca in 1868 and he a year later in Calcutta.

One of the most interesting memorials is to John Hensleigh Allen, Esq., of Cresselly, a JP who presided over quarter sessions for over 30 years and served Pembroke as an MP. The wonderfully florid epitaph recalls Allen thusly:

A love of justice and a bold and manly spirit made him in public and in private life the friend of the poor and distressed in society. His excellent and cultivated understanding accompanied by constant cheerfulness was delightful and improving to all around him; while to his family and friends his kind and affectionate nature, ever regardless of himself, was most endearing. His constant sweetness of temper and the warmth of his most generous disposition neither age nor sickness could subdue; and true to every duty he lived a pattern of a Christian gentleman.

The church is listed as Grade II* for its medieval tower and excellent set of historic monuments, as well as the quality of the Victorian restoration. 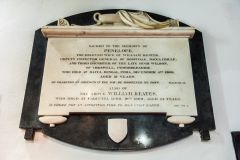 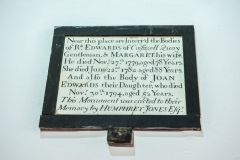 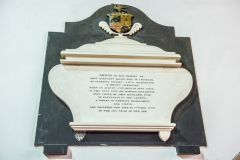 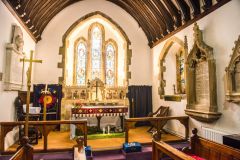