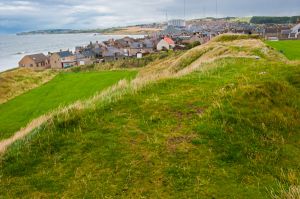 Burghead
A small town at the north-east edge of Burghead Bay, Burghead is built on a promontory joined to the mainland by a narrow neck of land. Burghead is a planned burgh; it was laid out in the early 19th century, but it stands amid remains of much older occupation.

On the promontory can still be seen the outlines of an ancient fort covering an area of over 4 acres. This fort has been the subject of much debate; some think it was built by the Romans, others that it was a Viking fortification known as Torfness. It seems most likely to have been a Pictish fort, the centre of a kingdom stretching over much of Moray.

The eastern side of the Burghead promontory bends to create a small harbour, given over to a mix of commercial transport, fishing, and pleasure boating.

Burghead gives its name to the Burghead Bulls, Pictish sculptured stones discovered here. Some of the stones, which are incised with carvings of bulls, are now in the British Museum, but one is on display in the visitor centre inside the fort. The visitor centre itself is worth a historical note; it is a picturesque former coastguard lookout. 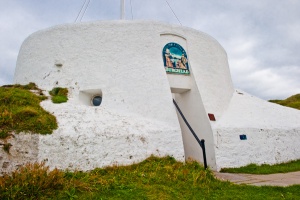 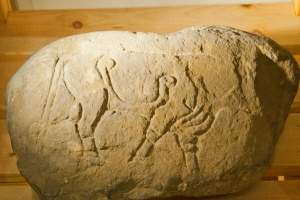 A Burghead Bull in the visitor centre

An old local custom is the Burning of the Clavie, held on 11 January to celebrate the old New Year. The Burning of the Clavie is a fire festival, which must date back at least 3 centuries. During the festival, a tar barrel set on the end of a pole is set alight and carried around the burgh before it is finally cut down on Dourie Hill. Embers from the clavie are kept as keepsakes and sent to natives of Burghead scattered around the world as mementoes of home. 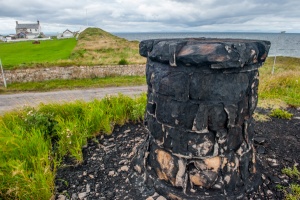 One final historic feature bears mentioning; in 1809 a hidden well was discovered, cut out of the solid rock beneath a town street. A stone stair leads down to an arched chamber, at the centre of which is a cistern, or well, almost 4 feet square. A stone ledge, or platform surrounds the well, and at one corner there is a stone altar, or seat. The well is usually referred to as Roman, but in truth, no one knows who built the chamber, or why they expended the enormous effort to carve it out of the solid rock. 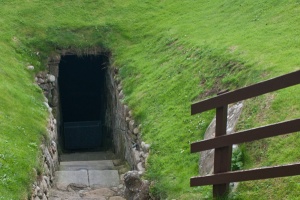 A short walk from the visitor centre is an old burial ground, built on the site of a 7th-century chapel dedicated to the Irish priest Aethan, or Aidan. Ruins of the chapel lasted until the 19th century when stones were scavenged for local building projects. The chapel stood within the triple earthworks defending the fort, immediately beside an access trail.

Several carved stones from the chapel have been discovered; one shows two dogs hunting a stag, while another, now in the visitor centre museum, shows an intricate pattern of interlace design. This stone is thought to have formed part of a slab shrine holding holy relics or remains of a saint. 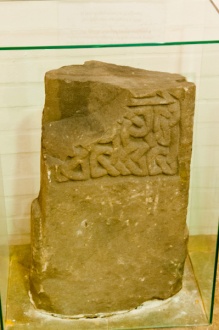 A fragment of the
stone shrine

Against the northern wall of the burial ground is a knocking stone, or cradle stone, which looks like a depression under a rounded arch. Local tales say that if you strike a stone against the depression you can hear a child's cry. 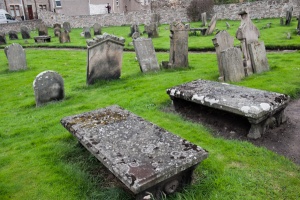 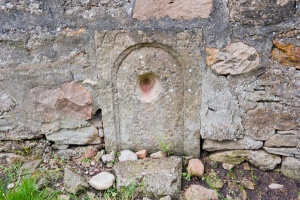 The coast on either side of the Burghead promontory makes an interesting study in contrasts. To the east, towards Hopeman, the shore is rocky, with cliffs and few places to access the water, while to the south and west is a long stretch of sandy beach bordered by forest plantations which stretch almost to the edge of the sand. There are numerous paths through the forest, making for enjoyable walks.

The county town of Moray is only seven miles away, as is the cathedral city of Elgin. Closer at hand is Duffus parish church, a roofless ruin of a medieval kirk, once burned by Edward I.

More self catering near Burghead >>

More bed and breakfasts near Burghead >>