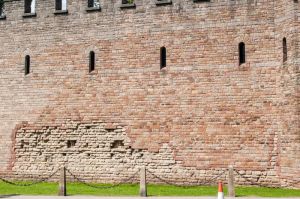 Cardiff Roman Fort, Roman stones, outlined in red brick
Cardiff Castle stands atop a Roman fort begun in AD 55. The fort was rebuilt twice befoe a major stone fort was constructed in the late 3rd century. Sections of Roman wall are incorporated in the medieval castle, and a Victorian reconstruction of a gateway shows how the fort might have looked.

Around AD 55 the Romans built a vexillation camp on the River Taff during their first major attempt to subdue the Silures tribe in south Wales. The fort was only used briefly before it was abandoned. This first fort was by far the largest of the series of forts built ver the next centuries. It enclosed an area of over 24 acres within earth ramparts topped by a timber palisade. It housed a combination of mounted and foot soldiers and was intended as a temporary campaign camp.

Then around AD 75 the next major Roman offensive in Wales took place, and the fort was rebuilt on a smaller scale as an auxiliary fort. This smaller fort, not even 5 acres in size, and a civilian settlement, or vicus, was occupied well into the 2nd century, around the time of Hadrian's reign. The 3rd phase of occupation came in the late 2nd century, when the site was used as a centre for iron working. A series of timber buildings, occupied by civilians, grew up within the earlier stone walls. This third phase came to an end in the middle of the third century and the site was the abandoned again.

Around AD 290 the Emperor Carausius established a shore fort on the same site in response to attacks by Irish raiders. The fort at Cardiff wes intended to guard the approaches to the River Severn, and was probably similar to the shore fort at Portchester in Hampshire. It was about 600 feet square and covered an area of around 9 acres. Defences consisted of a stone wall reinforced by an earthen rampart.

The wall stood to at least 17 feet, and sections still stand to this height. The wall was about 10 feet wide at the base, tapering to about 8 feet high as it rose. The earthen rampart still survives to a height of around 12 feet in places, though much has been lost under later medieval construction.

Around AD 370 the Roman fleet and army were moved elsewhere and the fort at Cardiff was abandoned once again.

It was not forgotten, however, for the fort was used as the setting for a medieval tale of Geraint and Enid; a romance associated with the Mabinogion cycle of stories. In the story the fort is the home of King Ynwyl. The character of Geraint may be modelled after a 5th century king of Dumnonia, who might well have known the real ruined fort.

When the Normans built Cardiff Castle they incorporated parts of the earlier Roman fort. Sections of the castle's outer curtain wall have lower levels made of Roman stonework. The rest of the fort is lost under the current castle. We are not even certain what the Romans called the fort; the Ravenna Cosmography refers to 'Tamium', though this might refer to the River Taff. The Antonine Itinerary mentions Bovium, though we're not certain the name refers to the Cardiff site.

The most obvious 'remain' of the Roman fort is a gateway and section of wall flanked by a pair of guard towers. Though impressive, the 'Roman' remains are a Victorian concoction; a romanticised vision of a Roman fort entrance.

Other remains are scanty but you can see stones from the Roman fort incorporated into the walls of the current Cardiff Castle. The Roman stones are outlined by an area of red bricks, so its very easy to spot the Roman construction.