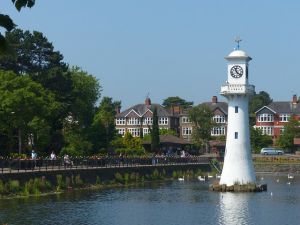 Roath Park
A late 19th century park with memorial to Scott of the Antarctic, Roath retains its Victorian feel. There is a mix of formal garden beds and a wilderness area to explore.

Roath Park was built on an area of reclaimed bog, covering 130 acres, including a large lake made by damming a stream.

In 1887 the wealthy 3rd Marquis of Bute donated land for a public park here. The park opened in 1894 and had as its focal point a large manmade lake, covering 30 acres.

In 1915 a lighthouse was built in the lake as a memorial to Captain Robert Scott's tragic Antarctic expedition. The lighthouse has become one of the most beloved, iconic buildings in Cardiff. Within the striking white lighthouse is a scale model of Scott's ship, the Terra Nova.

North of the lake is a wild garden, and still further north is the Llandennis Oval, with a pond thought to lie on the site of a 12th century enclosure, or llan, built by St Isaan.

Within the park are 12 Champion trees, recognised as the largest and finest of their species in Britain. A signposted trail leads around the park from tree to tree, among which are oleaster, Ginko Biloba, and Dwarf Japanese Red Pine. A modern greenhouse houses unusual plants including banana trees, orchids, and palms. The greenhouse replaces 2 original glasshouses built in the early 1900s.

Roath is perhaps best known for its rose gardens, which contains a trial bed for the National Rose Society. The garden produces exceptionally colourful displays in season.

The park is open daylight hours throughout the year, and there is on-street parking on nearby streets.

More self catering near Roath Park >>