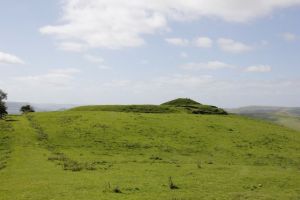 Castell Crug Eryr
A simple translation of the Welsh name of this castle tells a lot about it. Crug Eryr translates as "The Eagle's Crag", a good description of this dramatic hilltop above the Edw valley. The name may relate to Llywelyn Crug Eryr, a well known herald bard, who may have resided here. The castle itself is a very rudimentary earthwork motte and bailey.
The castle site consists of an enclosure about 40 metres square, surrounded by a bank and ditch earthwork measuring about 63 metres by 60 metres. The castle mound is about 26 metres diameter and 4.5 metres high.

Although we do not know when the earthworks were thrown up, they existed in 1188 when Geraldus Cambrensis stayed here on his famous "Journey Through Wales".

The castle may have been erected around 1150 by Cadwallon ap Madog, a Welsh prince who held quite a bit of territory in this area at that time. The first reference to a castle here is in the accounts of Geraldus on his travels through Wales with Bishop Baldwin. The Welsh castle was taken by the Normans in the late 12th century, but was retaken by the Welsh and remained in use into the 14th century.

The castle is on private property but is easily viewed from the nearby road.