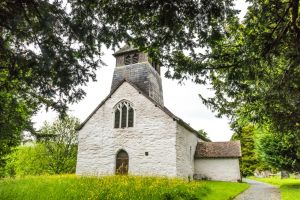 St David's church in Glascwm is not simply named for St David, it is said to have been founded by the saint himself, as a centre of Celtic Christianity. The 13th century nave has two original doorways, and the chancel dates from the 15th century. Part of the original wagon ceiling remains.

According to local legend the church is home to a 'magic portable bell' given by the saint. According to a tale related by the 12th century Welsh historian Geraldus Cambrensis (Gerald of Wales) the bell, called Bangu, was taken in secret by a local woman and sent to her husband, who was being held prisoner in Rhayader Castle.

She hoped he would be able to use the bell to secure his release from prison, but not only did the gaolers refuse to let him go, they seized the bell for themselves. That very night the entire town was consumed by fire. Only the wall that the bell hung on was spared from the flames of 'divine vengeance'.

No trace remains of St David's original church. At some point during the 13th century a new stone church was erected, within an older circular enclosure. It certainly existed by 1291, when it had a value of 13 pounds 6s 8d according to the tax rolls.

That 13th century church only occupied the current nave, for the difference in stonework suggests that the chancel was added in the 15th century, with stone quoins added to stabilise the joint between new and old sections of the building. The south doorway is 14th century.

The church was heavily rebuilt in the 19th century, when most of the medieval windows were replaced. 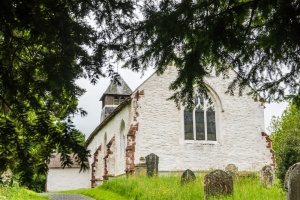 Approaching the church
from the east

The most interesting historic feature is the font, dated to the late 14th or early 15th century. The nicely carved chancel arch is 15th century, with wave mouldings typical of that period.

There are 15th century windows in both north and south walls, and a 14th century doorway at the west end of the nave. The nave roof is 15th century, built with arch-braced collars.

The interior is full of memorials; most are 19th century, but there are several good 18th century monuments including one to Thomas Lewis (d. 1736). Of similar date is a worn memorial to Jonas Howard (d. 1737).

One unexpected memorial is a simple wooden cross, tucked in behind an old church bell at the west end of the nave. The cross commemorates a pair of German airmen, Oberleutenant G Brixius and Feldwebel A Liedig, who died on 25 April 1942 when their Junkers 88 was shot down over the village. A military funeral was held for the dead airmen at Glascwm church. They were later reinterred at the German war cemetery at Cannock Chase.

St David's is a very well-preserved medieval church, in a lovely village setting. It is listed Grade I for its architectural interest. 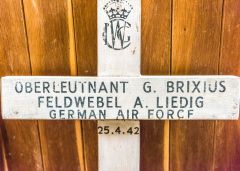 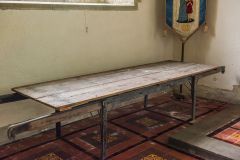