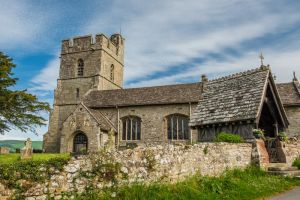 St Stephen's is a 15th century Perpendicular Gothic church; the only church in Wales dedicated to this saint. Inside is a treasure trove of history, with the oldest organ in Britain, a superb 15th century screen, and a font dating to perhaps the 8th century.

There was certainly a church here before the Normans came, dedicated to Ystyffan, a 6th century member of the royal family of Powys. When the Normans conquered this part of Wales they mistakenly assumed that Ystyffan referred to Saint Stephen, the first Christian martyr and a popular Norman dedication.

Control of Old Radnor passed from the princes of Powys to the Mortimer family of Herefordshire. One reminder of the Mortimer connection is a stone slab decorated with a floriated cross, set into the nave floor. This is thought to mark the grave of Hugh Mortimer, rector from 1257-1290.

A scalloped capital in the chancel arch suggests that there was a 12th century church here, but the present church is largely a product of the late 15th and early 16th century, with a pair of aisles flanking a nave, a chancel, west tower, and porch.

The church was burned during Owain Glyndwr's rebellion in 1401, and this destruction was probably the impetus for the rebuilding which gave us the current building. One curiosity is that there are several aumbries and piscinas throughout the church, suggesting that there may have been as many as 5 altars. That would mean that St Stephen's was much more than just a simple parish church, but had a very high status.

The most impressive interior feature is a 15th century carved screen separating the chancel and chapels from the aisle and nave. 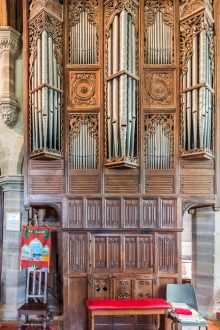 In the chancel stands the organ, with its beautifully crafted 16th century case, thought to be the oldest in Britain.

No one knows exactly when it was made, but it is not stretching the imagination too much to think that it was made before the Dissolution of the Monasteries, perhaps as early as 1500. It is interesting to note that one of the great early organists, John Bull, was born in Old Radnor in 1563, and must have practised, or been taught to play on this very organ.

Also worthy of note is the huge font, which is definitely pre-Norman, and perhaps as early as the 8th century. It is bulbous, with massive, stumpy legs that curve inwards. It is unlike any other font I've ever run across in a parish church in Britain, and it is not hard to believe that it could be 8th century or even earlier.

The nave roof is 16th century, with decorative bosses in the style of Tudor roses. Even earlier is the timber roof of the north aisle. Set into the aisle floor are 128 medieval glazed tiles, and there are more medieval tiles in the south aisle.

There are 16th century benches in the choir, and grave slabs dating from the 17th century are set into the chancel floor. In the south chapel is a marble 18th century monument to Lewis of Harpton.

St Stephens is one of the great medieval churches of Wales, a definite 'must see' if you enjoy history. It is easy to find; it stands in the middle of Old Radnor village, easily reached from the A44 3 miles west of Kington. There is a free parking area immediately across the road from the church lychgate. The church is normally open to visitors and was open when we visited on a lovely morning in May. 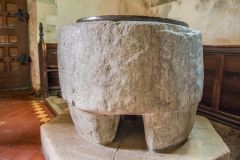 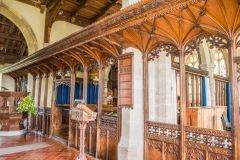 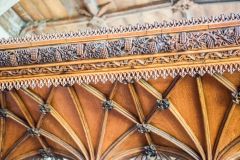 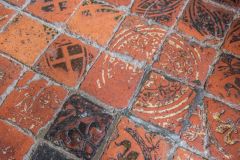 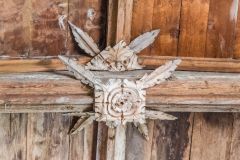