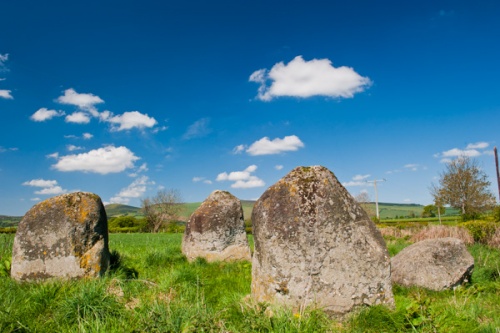 As the name suggests, this is a group of four evenly spaced standing stones, of 5-6 feet in height, in a rectangle shape. The south-west stone has 3 depressions which may be cup marks.

The grouping of stone has been wrongly interpreted as the remains of a burial chamber. It is instead a setting of standing stones known as a 'four-poster' type. Though fairly common in Scotland, this style of ancient stone setting is unusual this far south.

There are, as the name suggests, four stones, though one has fallen. The largest stone stands 6 foot high, and the site is roughly 16 feet across. Despite the fact that the setting sometimes called a stone circle, it is not, in fact, a circle at all, but a grouping of four regularly spaced stones to make a rectangular shape. The name 'Four Stones' has been used since at least the 17th century. There is a solitary standing stone about 400 metres ENE of the stone setting. 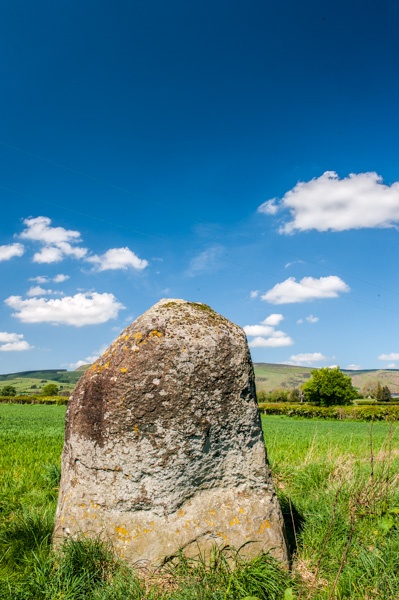 Like many ancient sites, local mythology has evolved several interesting stories about the Four Stones. According to one story, the stones mark the graves of 4 kings, killed in a great battle. Alternatively, they are 4 local chiefs who have been turned to stone. One version of the story says that when the bells of Old Radnor church can be heard at night, the stones go down to nearby Hindwell Pool to take a drink.

Compare this to a similar story about the Yetnasteen Standing Stone on Rousay, in the Orkneys, hundreds of miles to the north. It is fascinating how similar stories evolve in different places.

More modern theories about the stones make them sighting points for ley lines.

The stones are in a farm field, surrounded by a hedge that can make it difficult to see the stones as you approach. There is a slight widening of the road where one car can safely park with care. There are no interpretive signs, so you are pretty much on your own to make some sense of the site.

My family had had enough after just a few minutes, but I actually found the Four Stones quite intriguing. The setting is wonderful, with views over the surrounding fields to the Cambrian Mountains; it was a place I wanted to linger and soak up the atmosphere, and to wonder why someone went to the effort to erect this group of very large and heavy stones.

Clearly it was an important project, for it would have taken a lot of time and energy by a large number of people to bring the stones here and position them so precisely. Maybe we'll never know, but that's part of the fun of visiting ancient sites; to try to get a glimpse into the world of the people who built them. 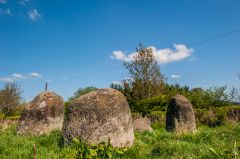 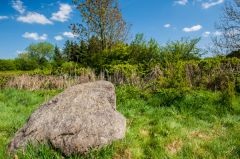 More self catering near Four Stones >>

The Agent's House Bed And Breakfast - 8.4 miles
Hereford, Herefordshire
From: £70.00 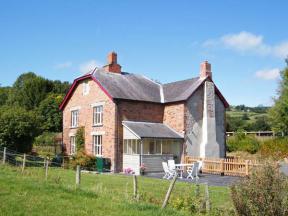 Sleeping five people in three bedrooms, this charming semi-detached cottage is in a rural location 3 miles from Walton, near Presteigne.
Sleeps 5