HERITAGE HIGHLIGHTS:   Fascinating medieval or earlier carvings from the destroyed church at Holme on the Wolds 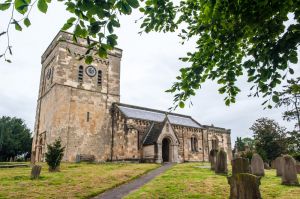 The manor of Etton once belonged to the Knights Templar, though the parish church of St Mary shows no evidence of that link. The church is Norman, much rebuilt in the Victorian period. The doorway arch is decorated with traditional Norman beak head figures, and the chancel arch is also Norman, of four nicely carved orders.

Tucked into a corner beside the altar is a fragment of a recumbent effigy thought to be that of Leonora Langdale. The fragment shows three small heraldic shields, one bearing the arms of the Freville family.

The most interesting historic features are set on the west wall just inside the south entrance. Here are a number of Norman carvings brought to Etton from the church at Holme on the Wolds when that church was torn down. 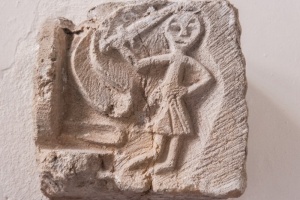 There are two figures of saints; one is St Andrew holding a key, the other figure holds a sword. Below these is a fascinating figure of a smiling soldier with elongated feet, wielding a sword. The style is old enough to be Saxon, though the sources insist on a Norman origin. You decide.

Against the north wall is an oval plaque to the memory of Reverend John Lothropp, who was baptised at Etton in 1584 and later went on to found the first congregational church in America and served as pastor at Scituate and Barnstable in Plymouth Colony from 1634-1653.

A framed certificate from Etton in Massachusetts commemorates the American link with Etton. Lothropp was an ancestor of both former American presidents George Bush. 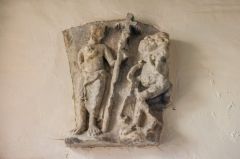 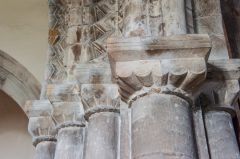 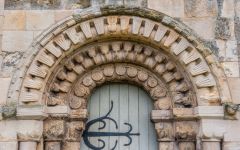