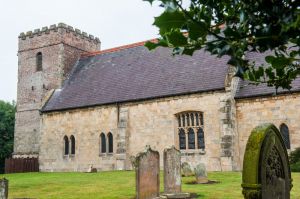 All Saints church at Kilnwick dates to the 12th century, though it was subsequently much altered in the 13th and 17th centuries and again in 1871. From that first Norman church comes the north doorway, decorated with traditional Norman beakhead ornamentation.

This door was rest when the church was rebuilt in the 13th century. Above the beak heads is an order of reassembled geometric carvings.

One odd feature is that the keystone position of the doorway arch is taken by a carved figure of a pig's head. According to the very useful church guide, this is one of only two such doorways in the country where a pig appears as the keystone.

The north arcade is early 13th century, with Early English arches, only one of which is decorated with stiff-leaf capital carvings. The most easily noticed exterior feature is the top of the west tower, which was rebuilt in red brick in the 17th century. There are fragments of medieval grave slabs built into the exterior walls; look for carved sections low to the ground.

The font is a simple Norman design with dog's tooth pattern on the rim along with cable moulding, and there are numerous wall monuments to members of the Grimston family. One other feature is the pulpit, which dates to the 17th century and originally stood in Beverley Minster. It was purchased for Kilnwick church in 1726 for the grand sum of three guineas. 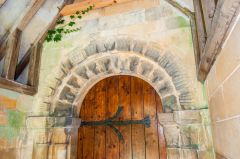 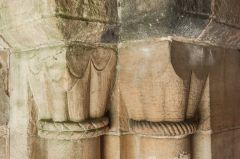 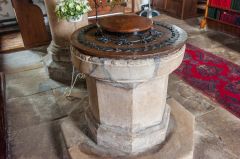 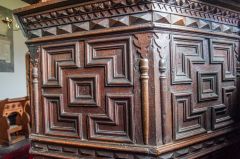 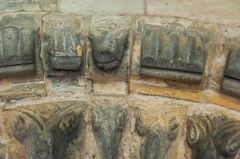 More self catering near Kilnwick, All Saints Church >>

More bed and breakfasts near Kilnwick, All Saints Church >>