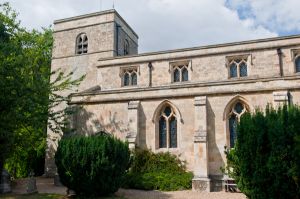 Situated on a rise above the wide village pond, and insulated somewhat by the steady stream of traffic along the A1079, stands All Saints church. Local tradition suggests that there was a church here since the time of St John of Beverley (d. AD 721). According to the Venerable Bede, St John was invited by Earl Puch to consecrate a church at his nearby manor.

A later version of the tale suggests that the church was here in Bishop Burton. However that may be, the building we see today dates from the 13th century. The oldest part is the tower, while the nave was rebuilt in 1820.

The size of the church is an indication that Bishop Burton was once a very important place. The clue is in the name of the village; the archbishops of York owned the manor and built a palace here. The site of the palace was to the east of the churchyard, but nothing can be seen.

By the south-west door is a small 13th-century carved figure of a woman, thought to represent the Virgin Mary. Much more elaborate is the quite lovely alabaster tomb of Rachel Gee in the north-west corner.

Gee (d. 1649) was married at the age of just 14 to the son of Sir William Gee, and she died at age 18, four years later. At the head of the recumbent figure is a tiny kneeling figure of a child, suggesting that she may have died in childbirth.

There are three wonderful historic brasses in the chancel floor. One is an effigy of Joanna Rokeby (d. 1521) who is portrayed in a finely crafted dress trimmed with fur. Another brass shows Lady Isobel Ellleker (d. 1579) and her husband. Here the details of the clothing are not quite so detailed.

The final brass is the most interesting; this is a very fine chalice brass above an inscription to a 15th-century vicar. This is thought to be the second oldest chalice brass in Britain (the oldest is at Ripley, also in Yorkshire).

In the sanctuary is a beautifully carved 14th-century piscina, while the east window was made by Clayton and Bell of London, whose work adorns so many East Riding Victorian churches. High on the west wall are a trio of armourial hatchments, depicting the arms of the Watt family, the Gee family, and the Dean and Chapter of York.

The final feature of note is a wooden bust of John Wesley set upon the south aisle wall. Wesley is said to have preached on the green at Bishop Burton. When the tree under which Wesley had preached was killed by lightning, Richard Hall-Watt had the bust made from the wood. The bust was originally in the Methodist chapel, but it became infested with woodworm.

The vicar of All Saints bought it for £2 and had it treated and restored. The workman who restored the bust wrote on his timesheet, 'To rebaptizing John Wesley and curing him of worms, 25/-'. I shall pass over that anecdote without comment.

Verdict: an intriguing church with many interesting historic features. Well worth a visit. 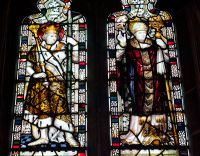 More self catering near Burton Bishop, All Saints Church >>

More bed and breakfasts near Burton Bishop, All Saints Church >>