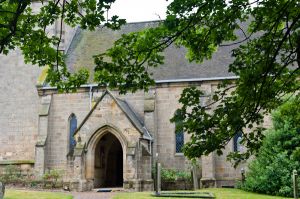 Lund is a small village between Driffield and Beverley, near Middleton-on-the-Wolds. The parish church of All Saints dates to the Norman period, but the current building is a bit of a mishmash of various styles.

The nave, north aisle, and porch are 13th century, rebuilt in 1853 by Cuthbert Brodick, who designed the Town Hall at Leeds. The most striking exterior feature is the tall Perpendicular tower.

There is a rather plain Norman font and a Victorian east window by Clayton and Bell, brought to Lund from Langtoft church. The most interesting historic features are a pair of medieval effigies set on either side of the altar. On one side is the effigy of Edmund Thwaites, Lord of the Manor of Lund and Commissioner of the Peace for the East Riding from 1483-1498.

Thwaites, the son of Sir Henry Thwaites of Lund, also served as Commissioner of Array from 1484-1485 and died in 1500. The other effigy is that of Edmund's wife Joan, of whom little is known save that she died sometime before 1500.

Note: Don't confuse this Lund near Middleton-on-the-Wolds with the other Lund near Selby! 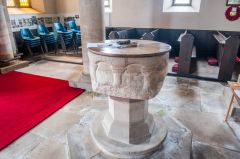 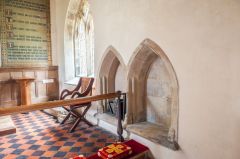 More self catering near Lund, All Saints Church >>

More bed and breakfasts near Lund, All Saints Church >>